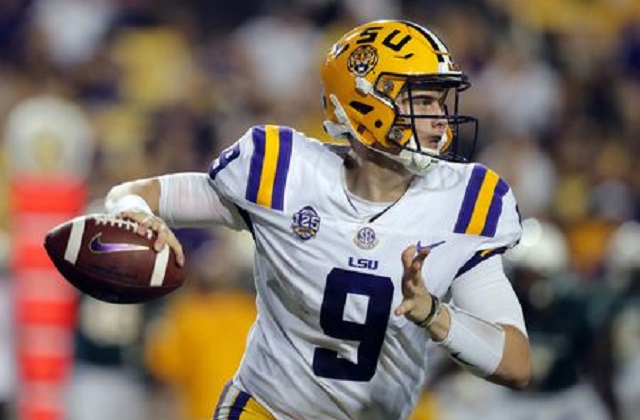 Let’s play a game of true or false. There are a lot of rumors circling around regarding teams and draft prospects. This is the time that teams will intentionally release false information to boost their leverage in the draft. For instance, a rumor that came out earlier in the draft season is that the Redskins were interested in taking Tua. While that rumor had little to no validity, the hope from Washington was that the rumor would gain traction and entice other teams to trade up to the second pick to ensure that they were able to get Tua.

Now, the real question is what current rumors have any validity. That’s what I’m here for today. Is your favorite team looking to trade up in the first round? Are some of the top prospects going to fall in the draft? Do any of us have any idea of what is going on? Let’s find out!

Rumor: Joe Burrow doesn’t want to play for the Bengals

Here’s the thing, the Bengals would need a massive haul to even consider trading this pick. Something along the lines of three first round picks and a player or additional draft picks. There are only three teams in the draft that would have enough draft capital to make that deal, the Dolphins, the Jaguars, and the 49ers. The Dolphins and the Jaguars are the only two teams that would be in the market for a quarterback. However, both teams, especially the Jaguars, have so many holes to fill on their teams that a trade of that magnitude would be detrimental to either team.

The only trade scenario that would make some resemblance of sense would be a Bengals/Jaguars trade. If the Jaguars believe that Burrow is the future of the NFL, they could offer both of their 2020 first-round picks, Yannick Ngakoue, and a 2021 pick. This would give the Bengals plenty of draft equity to fill a lot of holes on their team and provide them with a pro bowl talent at DE. But this trade is a reach. It is doubtful that this kind of trade would happen.

Rumor: Tua Tagovailoa is going to fall in the draft

The rumor is that the quarantine is going to be the downfall of Tua. Apparently, there is a consensus that Tua is going to fall in the draft, with some sources saying that he could fall late in the first round. The logic behind this rumor makes sense. Tua struggled to stay on the field in college, creating a valid concern that Tua’s health could continue to be an issue in his NFL career. Due to the quarantine, nobody can see Tua in person either. Teams have the same information that the public has, a video of a private workout. Teams might not want to invest an important pick into a player with so much risk.

I don’t think it matters.

The NFL is a quarterback driven league. Winning a championship is virtually impossible without a decent quarterback. Every team must have a good quarterback to have the capacity to compete in this league. If Tua didn’t have an injury concern, there is a real possibility that Tua could be the first player drafted in the 2020.

Rumor: The Lions are looking at trading the third pick

The Lions General Manager, Bob Quinn, has come out and said that the Lions are fielding offers for the third pick. Quinn has also said that if a deal is to be made, the deal will get finalized before the Lions are on the clock. If the draft starts as planned with Burrow and Young being drafted at number one and two respectively, many teams could want to trade up into the three slot. Okudah, Simmons, Derrick Brown, or another quarterback would be available. A star defensive asset or quarterback would provide plenty of incentive to trade up.

There are even rumors that the Patriots are in discussions with the Lions regarding trading all the way up to number three. The Pats likely don’t have enough capital to trade up twenty picks in the first round, but another team certainly could. The Panthers need a cornerback or a defensive tackle, and the Lions could still get an elite talent if they move back to the Panthers seventh pick.

Rumor: The Patriots want to spend a “premium pick” for a QB

The other option is that the Patriots could trade a guy like Joe Thuney. Teams like the Lions, Giants, and Dolphins could all use a proven veteran like Thuney to provide a massive boost for their offensive line. However, the Patriots would still have to give up a lot of first round picks with Thuney to move up that far.

The odds of the Patriots getting a “premium” QB are slim.

Rumor: The Broncos are looking to trade up for a wideout

The rumor mill has it that the Broncos are in talks with the Browns to move up to the number ten pick to get another wide receiver for young arm Drew Lock. This move would provide Lock with all the talent that he could possibly need to be successful in the NFL. If Denver manages to land CeeDee Lamb, their offense would consist of Lamb, Sutton, Fant, Melvin Gordon, and Phillip Lindsay. That’s a scary offense.

There is a clear drop off in talent after CeeDee Lamb and Jerry Jeudy. This move would make it possible for the Broncos to land one of the top wideouts in the class.

Rumor: The Falcons want to trade up for CJ Henderson

The rumor makes all the sense in the world. The Falcons no longer have their best cornerback in Desmond Trufant and all fingers are pointing towards CJ Henderson being the replacement in Atlanta. This rumor is adjacent to another rumor that CJ Henderson is a top ten talent in this draft. The Falcons are currently sitting at pick 16, with five or six teams drafting ahead of them with potential cornerback needs.

A lot of things can change on draft day, and teams can get desperate to fill a need over drafting talent. If the Falcons really believe that CJ Henderson is their guy, they will likely want to trade up to guarantee that they get their guy. Otherwise, they could fall victim to a run on cornerbacks prior to their pick.

It must be frustrating for Sam Darnold seeing what his 2018 draft class counterparts have for talent on their teams. The Ravens, Bills, and Browns have provided their quarterbacks will all the talent in the world around them, while Darnold is still throwing the ball to Jamison Crowder. Yikes.

With a loaded draft class at wide receiver, there was a universal consensus that the Jets would finally do Darnold a solid and give him a true WR1 to throw to. That doesn’t appear to be the case. Rumor has it that the Jets are looking to draft an offensive tackle to protect Darnold. That’s great, seeing as the Jets offensive line allowed 52 sacks last season, but Breshard Perriman is not a WR1.

Teams are going to continue to load the box, making life miserable for Le’Veon Bell until there’s another real threat on the team. It doesn’t matter how good the offensive line is if Darnold has nobody to throw the ball to. End of rant.

This pick could really go either way and I wouldn’t be surprised if the Jets do lean towards a tackle, especially if Andrew Thomas or Jedrick Wills are still on the board.

What are your thoughts on the current rumors swirling around the NFL? Reach out to me on Twitter @CamHarperNFL and have a chat!