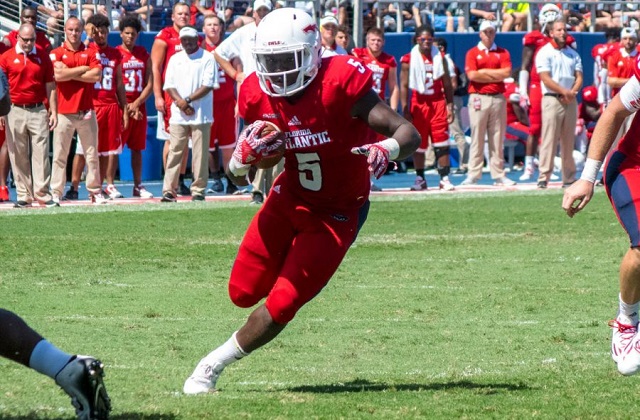 The Other Running Backs

You need a running back. This year. Next year. Every year. running back is a difficult position to fill. If you were in dire need this year and the big-3 slipped through your hands - Josh Jacobs, Miles Sanders and David Montgomery - have no fear, there are two other running backs I like very much that can be had (slightly) cheaper.

The first thing I noticed about Singletary is that he plays much bigger than his listed 5’7”. He pairs patience and vision with an inability to be tackled with a defender’s first effort. He possesses good initial burst, but not elite speed. Watching some FAU film, I truly wish he were on a better team as at times it appears his talents were wasted. Well that should all come to an end in Buffalo. The Bills have one of the more unique running back rooms in the NFL, featuring LeSean McCoy, Frank Gore and Timothy Antonio (TJ) Yeldon. So how can Singletary get on the field? Well, it might not be easy. First, I expect McCoy to either be cut or traded prior to the season. The same can be said for Gore, but he is great for younger players and his contract is relatively cheap, so he might stick around. I feel Yeldon will be the starter for the Bills this season, but he simply doesn’t do any one thing exceptionally well, so at some point Singletary should have time to shine. He certainly has a longer shot to become a starter then Sanders, Montgomery or Jacobs, but with his receiving has the possibility to be a low end RB2 at the finish of the season.

You can watch some Devin Singletary highlights here https://www.youtube.com/watch?v=9m3VUP2NPOg

I honestly LOVE this lading spot, and honestly the Ravens should be charged with theft for stealing Justice Hill so late in the draft. This is an offense tailor made for Hill, as it won’t differ too much from what he is used to running in Oklahoma State. The one difference, however, is his collegiate quarterbacks are far superior passers. I digress. Much like Devin Singletary in Buffalo, Hill has some people in front of him. Unlike Singletary, I don’t see them going anyway in the immediate future. Mark Ingram is clearly the #1 running back for at least this season. Gus Edwards is still there and coming off a very productive and unexpected season. They also have Kenneth Dixon, and while he is not a complete back, he is still an obstacle. As for Hill, he’s an effortlessly shifty player with a great burst and vision. He can out stutter step most defenders and usually breaks free from initial defensive contact. Again, I love this landing spot for him and think he will make a solid taxi stash for at least this season. If the Ravens decide to move on from Mark Ingram, however, Hill could end up being a very solid RB2.

You can watch some Justice Hill highlights here https://www.youtube.com/watch?v=4G9MUJuKBLc

I feel that both players have a tremendous amount of upside, but to me Singletary has the ability to pay dividends sooner. So if you are in need of running back help, don’t sleep on these two players in your rookie draft.

Questions? Comments? Hit me up on Twitter @Thembower85 and make sure you check out the Dynasty Rewind!