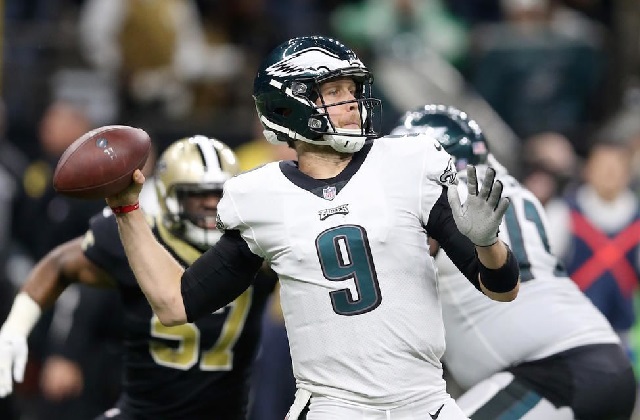 Nick Foles and the 2019 Jacksonville Jaguars

The Jacksonville Jaguars have struggled on offense in recent years. Frankly, the failures of the offense on the field are primarily due to the failure of the QB position. The Jaguars front office has consistently failed with regard to selecting a long term answer at QB in the draft over the past decade. The names of Blaine Gabbert and of course Blake Bortles immediately come to mind.

The 2018 Jaguars ranked 27th in the league in passing offense, averaging a dismal 194.3 passing yards per game. In contrast, the Kansas City Chiefs, who ranked 1st in the league, averaged 309.7 yards passing. It’s not a coincidence that the QB leading the Chiefs offense in 2018 was Patrick Mahomes. It seems abundantly clear that NFL teams need to succeed in the passing game in order to win games.

The signing of free agent Nick Foles has illustrated that the Jaguars believe that adding an experienced QB is the answer to improving the offense rather than bringing in a young player as they have done previously. How will the team’s change in philosophy affect the offense? Should fantasy owners look at the Jaguars offensive' players in 2019 fantasy drafts with Nick Foles at QB?

The Jaguars appeared to be laying the ground work for the eventual signing of Nick Foles early in the offseason when the team added John DeFilippo as offensive coordinator. DeFilippo was the QB coach with the Philadelphia Eagles from 2016-2017 and is known to have a great relationship with Foles. I think it’s clear that the 2019 Jaguars offense will have some similarities to the Eagles offense when Foles was at the helm. Obviously, the personnel of the Jaguars will not be the same to that of previous Eagles teams. However, I assure you, any seasoned football fan will be able to identify the similar offensive game plans when the Jaguars take the field in 2019.

DeFilippio will likely want to bring in a pass-catching RB to compliment Leonard Fournette. The Jaguars will likely be letting RB T.J. Yeldon leave the team via free agency, which will likely lead to the team drafting a RB in the draft. Fournette attempted to be more involved in the passing game in 2018, but I don’t think he is the answer in that regard. Fantasy owners should continue to target Fournette in drafts. In my opinion, Foles will only help his value. I don’t see defenses stacking the box as they have done in previous years with Bortles at QB. I also see the TE position being more effectively utilized in 2019. Foles always seemed to enjoy throwing to the TE position. Additionally, I see that Jaguars utilizing an effective slot receiver in 2019. You may recall how often Foles threw the ball to Golden Tate as an Eagle. I should mention that the Jaguars have had some issues on the offensive line. The offensive line does not score points for fantasy owners, but the quality of that line will dictate whether the skill players on offense can score fantasy points. I expect that the Jaguars will address the offensive line in order to give the new franchise QB a much better chance to succeed.

In summary, the signing of Foles will have a positive impact on the offense in 2019. Foles and his new offensive coordinator will be a vast improvement over what the team had in previous years. Fantasy owners can look to a Jaguars offense that can help them win. However, the Jaguars will not suddenly be the 2018 Chiefs. It’s important that all fantasy players have realistic expectations as they evaluate the Jaguars players available to them in fantasy drafts in 2019. The Jaguars offense will be better, but not necessarily great.