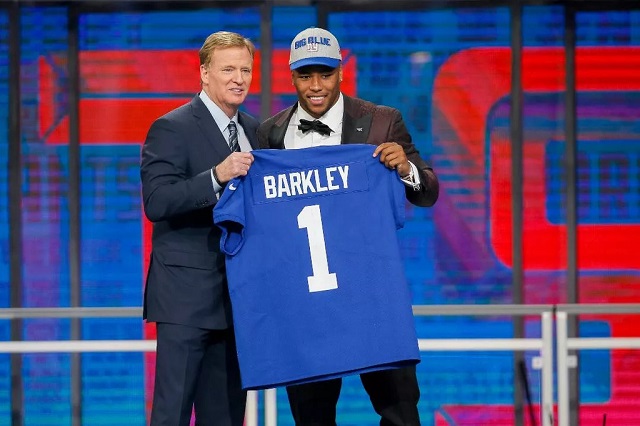 As I listened to the boos for Roger Goodell echo throughout AT&T Stadium, I knew the REAL Draft was about to begin. I was so tired of listening to the talking heads in the media shout out the countless permutations of which 32 players could get selected in the first round. Their incessant banter over the last several weeks was finally ending, and the facts would expose themselves over a next few short hours.

Although it will never happen, I would really like to see a player who is rated to go in the fourth round or so get picked in the first. Quite frankly, the sad truth is that the scouts, general managers and frothing-at-the-mouth media have more wrong than right answers, and a few fourth-rounders will exceed the performance level of those highly touted bonus babies.

The best thing about these festivities is that you never quite know what to expect. Ready for an evening of suspense — surprise trades, a few “what the hell?” picks (Hello, Cleveland. LOL.), seeing placers drop precipitously while others come up from nowhere to sneak into the primo round, allowing us to get a little background on those kids. I sat back with my laptop and a notebook and was all ready.

One thing that never surprises me is that with hindsigh.t you always find out how screwed up this whole process is as far as picking players that will live up to expectations. If GMs were really judged honestly by owners, many more would be replaced annually. If we all performed that poorly in school we would now be working somewhere as busboys. Their success rates just totally suck.

With all that built up angst and sarcasm at my disposal, I proceeded to watch the draft from two varying perspectives:

Indeed, there were quite a few events from Thursday evening that left me scratching my head. These are the ones that were shockers to me:

Just about three months until training camps open, Buckle up for the journey. My colleagues and I at Advanced Sports logic are intent on helping you become the champion you want to be. Between our top-rated software and our poignant articles, we will be with you for the 2018 season in its entirety. What happens then? That, my friends, is easy. We start over and do it all again in 2019!