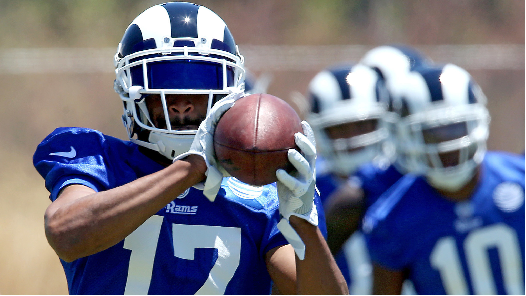 ASL’s Levi Andrew gives you some late-round WR fliers to benefit your standard or PPR team.

Have you ever got to that point in the draft where it’s just a bunch of names that you don’t really know? Here is a list of WRs that will be late round picks. The more you know, the easier it will be to win. That’s what we all want in the end - to beat our buddies and gloat. Make sure you add this to your research so you can win those late rounds which will be key to success.

This article is an update from my previous "Late Round WR Flyers" article, reflecting new ADP as of August 9, 2017

There should be no reason Wallace is being Drafted in the 9th round. Finishing as the 24th best WR in standard scoring last year, yet guys like Wilie Snead, Donte Moncrief, and Martavis Bryant are going before him. I will gladly draft him in the 9th but he really should be drafted higher.

With Steve Smith, Dennis Pitta gone, there are 300+ targets up for grabs. Benjamin Watson is back, but missed all last year with injury and Breshard Perriman hasn't came on in his first 2 years. Don't let the Maclin signing differ your pick of Wallace. He will still be Flacco's #1 target next to Woodhead. Wallace will be a steal in round 9 when he produces WR1 numbers for you. You can thank me later. He can easily become a WR2 - WR1 with another 20+ targets coming his way. Hopefully the touchdowns come up too but he's never been a true red zone threat.

Woods is set to be the Rams' #1 WR this year. Listen to this, the last two years the Bills' passing percentages were 51.4 in 2016 and 49.9 in 2015. With this low of a passing percentage a Bills' WR2 is not going to have much fantasy value. Sean McVay and Greg Olson are pass heavy coaches. Last year McVay caused Washington to have a 62.4 passing percentage and Olson caused Jacksonville to have a 62.7 passing percentage. The Rams are now without 3 WRs from last year. Woods has the youth on his side being only 25 with 4 years of NFL experience already. I can see Woods ending the year as a high end WR2, if Goff can get it together.

Robert Woods is my 2017 sleeper. I was high on him before most. Look for Woods to lead the Rams in targets. Goff and Woods have been building a rapport. At his price, I will own many shares of Woods this year and greatly appreciate his WR2 numbers at the end of the year. Swoop Woods up at his ADP in the 14th round before his ADP shoots up after the preseason.

Adam was a huge asset to Bradford last year. Yes, he has Diggs and Rudolph in front of him. Behind him are last year’s first round pick Laquon Treadwell and Michael Floyd. But if he holds them off which he should. I can see the same stat line or better. WR3-WR4 potential.

Thielen's ADP has rosen since I first wrote an article that included him, which is fine but with Diggs ADP of 6.91 I would much rather have Adam. It seems in training camp that Treadwell still isn't clicking, which is great news for Adam. Michael Floyd has been lighting it up in camp but has a 4-game suspension to deal with at the beginning of the season, which only helps Adam more.

Yes, I know you have Odell and Marshall there but that's the point. They will be on the outside and Shepard in the slot. That's going to leave plenty of check downs and inside routes open for Shepard. Eli is getting older, so Shepard will become a safety blanket for him. Yes, the Giants drafted TE Evan Engram but Shepard already has a year with Eli under his belt, in which he produced good numbers. Shepard's ankle injury looked to be worse than it was, which is also good.

Since I first wrote this article his ADP has fallen even more. This is most likely due to Marshall's strong camp so far and his injury. I still believe Shepard will produce some numbers and could end up being your WR4 low end WR3.

Kenny stills has been up and down since entering the league. He had one good year finishing 2014 63/931/3 with the Saints. Last year he had a career high with 9 touchdowns. Yes, that's where most of his points came from. But Coach Gase knows how to use him and Gase also isn't happy with Devante Parkers work ethic. However, the Dolphins also signed Julius Thomas which could hurt him. I just have a feeling he's going to have a good year. He got paid and he's has the opportunity.

With the signing of Jay Cutler, I think Stills is one to benefit. Cutler likes a taller receiver and Stills is a 6-foot receiver. His ADP has fallen a few spots but not much. With Landry being a 5'11" guy, I would draft Stills at his current ADP. Look for Stills to be a solid WR3 in 2017 with WR2 upside.

Taylor started last year as an outcast finding a new team. By the end of the season he found himself a nice home as a big play threat for Matt Ryan. He also had 1 more touchdown then Julio in the regular season. Fluky, I know, but I can see him out-touching Mohamed Sanu this year. Plus, he's always capable of taking one to the house. In my opinion, he's a WR3-WR4.

The only thing holding Gabriel back could be any changes to the offense. Barring them not changing the playbook a ton since they lost Kyle Shanahan. I still see him as a low end WR3 but for sure a handcuff to Julio.

Robby just became the WR1 for the Jets. Yes, we all know the Jets are a disaster, but of all the WRs there, Robby will have the most value. He's probably not WR1 value, but some value. Robby, as of Tuesday August 8th is going undrafted. That will most likely change in the coming days due to Quincy Enunwa's neck injury. Look to grab Robby at the end of your draft for maybe a WR3 value this year.