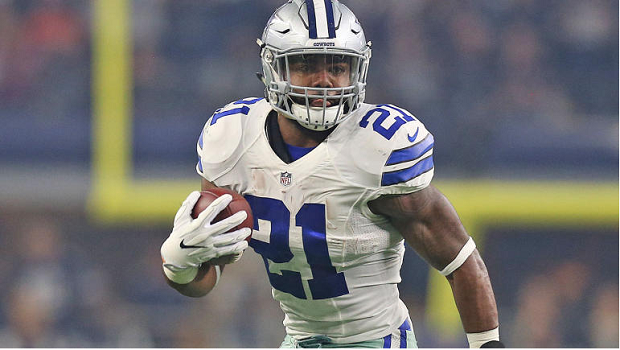 What to do about Ezekiel Elliott?

Over the weekend, news came out stating that Ezekiel Elliott may be suspended for one or two games. Then on Monday came the report that he may have punched a guy in the face, leading to another police investigation. What a headache for one of fantasy football's top players! The question everyone wants to know, of course, is: How fantasy owners should react to this in their drafts? It's very simple for anyone in a league where playoffs determine the winner -- you shouldn't react to the news at all.

If Zeke misses one game, he can certainly still finish among the top three backs. Remember, he started slowly in his rookie year and still managed nearly 2,000 total yards and 16 TDs while skipping Week 17. A two-game suspension would be a little more difficult to deal with, but a top-three season is still on the table. I have him behind Le'Veon Bell and David Johnson already. Some people may put Antonio Brown or Odell Beckham Jr. ahead of Elliott now, but I think that is a mistake.

There is no easier problem to solve in fantasy football than a starter missing Week 1. Almost everyone on your team is healthy and there are no bye weeks yet, so your odds of being 1-0 even without your top player are still very strong. You should be willing to give up one or two early weeks of performance for having a true stud in your lineup in time for the playoffs. Even if Elliott is given a four-game suspension or something crazy like that, take him at the bottom of the first round. Trust your roster-building skills and know that once you reach the playoffs, that's when you will need Zeke most. By that point, he will look like a bargain.

This isn't quite as true in MFL10s, however. Keep in mind that those leagues are winner-take-all and based off of total points. In this case, it's really important to know how many games Elliott is going to miss. I expect him to get a two-game suspension, which isn't the end of the world for the same reasons stated above -- your team should have healthy replacements and no bye-week problems.

Despite the potential of a multiple-game ban, I would still take Zeke very early in an MFL10, just behind Brown at fourth overall. If you are a Beckham Jr. disciple, I can understand the argument to move Elliott to fifth. Beyond that, I think you are missing out on an opportunity. I watched him drop to 10th in one league. That is far too low for one of the biggest producers in the game. If his suspension comes in at only one game, I'd keep him slotted at third overall.