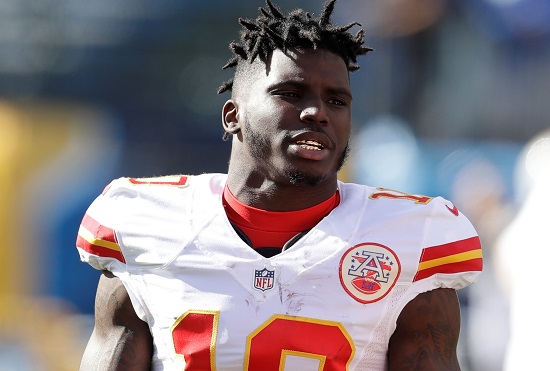 Today I present to you 3 criminally underrated dynasty WR’s. They check all the boxes for dynasty super stardom, but someone is missing the boat. They are young, extremely talented, and have at least some past production to point at for future projections. The fact these guys are being left out in the cold is a huge opportunity for you in dynasty startups or for dynasty trade targets.

Candidate #3 Quincy Enunwa age 25: Quincy Enunwa to people who actually watch football games was one of the most impressive WRs in the league last year. The guy runs like a RB once he has his hands on the football, and runs fearless routes over the middle like a TE. Despite having some terrible QB play to deal with, Quincy ended up WR#45, while fighting Eric Decker and Brandon Marshall for footballs. This year Quincy still has terrible QB play to deal with, but no Brandon Marshall and no Eric Decker.  A reasonable person could assume that his stats might improve from his WR#4 range. Possibly all the way to the middle of the road WR#3. I would argue that if if he can find some decent QB play or just enough garbage time stats he is in his prime approaching a breakout to a WR2. His ADP says otherwise as he is sitting at pick 143. 143! Some guys that are going ahead of him in dynasty startups are Fat Rob Kelly, Chris Goodwin, Austin Hooper, Danny Woodhead, and my favorite, 1 year of Big Ben. I look at that list and shake my head. I’m not sure how people keep ignoring this guy, but I hope it continues!

Candidate #2 Tyrell Williams age 25: Rotoviz Dynasty ADP Tyrell Williams is drafted around pick 110 in dynasty startups. This is absolutely criminal. Tyrell was a middle of the road WR2 last year averaging 13.5 points per game. Don’t forget he also tore his labrum towards the end of the season and couldn’t put his arms above his head. This was literally the least heralded breakout campaign in the history of professional football. What more do you want from this guy? Yes, Kennan Allen is back. Yes, Mike Williams was drafted. Mike Williams is already hurt. Kennan Allen will be soon. Most of you love Phillip Rivers, but who is he going to throw to? A 100-year old Antonio Gates? Other guys you can get around the range of Tyrell Williams in a start up- JuJu Smith, Brandon Marshall, Will Fuller and Duke Johnson. I don’t know about you, but I’ll take the guy who had 1000 yards and 7 TDs last year at 25 over two role players, a middle of the road rookie, and a guy on the tailspin of his career.

Candidate #1 Tyreek Hill age 23: There are two kinds of people in the world right now - Hill lovers and Hill haters. Color me a Hill lover. I sincerely don’t know what you want the Chiefs to tell you about this guy.  First of all Andy Reid starts the offseason telling you he is going to get the ball more. Secondly, he gets pulled from kick return duties. Then they cut #1 WR Jeremy Maclin. What more do you need to know that this dude is going to get the ball a ton? My favorite offseason buzzwords are “Tyreek Hill can’t repeat his TD performance from last year”. Seriously? Why not? He is going to have more touches. More touches typically = more production? Am I wrong here? Tyreek Hill finished last year just outside of WR2 production finishing WR#25.  This is also with him being eased in as a small school rookie. This year I expect him to get the ball more often, and have his route tree grow, as most young WR’s will have happen. With 2.5 more points per game, Hill is a bottom end WR1. To me, that is easy money baring injury with much higher possibilities being within reach. The cost to buy in to your Hill stock? Pick 49. You have to give up on Mike Williams (really?), Demarco Murray (29) Donte Moncrief and Corey Coleman for this opportunity. I don’t know what people saw in Coleman that makes them think he is a better bet than Hill, but count me in the Hill camp.