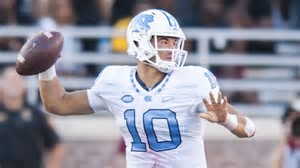 As pro days wrap up and the draft looms large we look at the 3rd round of our first mock draft and discuss any significant moves in the first two rounds based on performances at pro days and potential free agent acquisitions that might have an impact positively or negatively on players.

Leonard Fournette our number 1 overall pick weighed in considerably less at his pro day solidifying his position as the number one overall selection in dynasty drafts. As mentioned in my 1st round overview, he may not have the most productive rookie season however we expect him to be the best dynasty asset from this draft. The news that Marshawn Lynch may be close to signing with the Oakland Raiders doesn’t impact this rookie class considerably as we expected an experienced back to sign with the Raiders, such as Peterson or Charles. Beastmode would be an interesting addition and if you are about to have your free agent auction you may want to throw a few dollars at Lynch given the lack of quality starters at running back, but be careful not to overpay for him.

The 3rd round is where if you are smart with your draft picks and been able to trade down where possible and add additional picks in the 3rd round, you are likely to find some value in this round and from a dynasty perspective this is where you need to hit for long term success. Picking up from last week's 2nd round overview, here are my 3rd-round recommendations:

# 25 overall – Taywan Taylor (WR – Western Kentucky) We almost included him in the second round but have him going at the top of the 3rd. This guy was overlooked coming out of high school, actually being labeled a zero star recruit. And yet here he is 4 years later looking to be drafted into the NFL. Where he falls exactly in a long list of receivers is a guessing game and some have him in their top 5. While we certainly like his route running ability and his different speeds, we are not quite as bullish on him due to the propensity for the Western Kentucky offense to utilize the screen passing game. If he is available at this point in the draft we would be very happy to snap him up.

# 26 overall – Malachi Dupre (WR – LSU) Dupre is tough to grade because he didn’t get the best quarterback play at LSU during his time there. Many thought he would improve his NFL draft stock by going back for another year, however he elected to come out early and will probably be a day 3 draft pick and spend some time waiting for his opportunity. He has size and ability to adjust to the ball in the air which could make him a deep threat. Was the leading received at LSU, although his numbers weren’t fantastic. He is a player that shows raw potential and given some time could develop into a decent wide receiver with upside.

# 29 overall – KD Cannon (WR – Baylor) A lot of upside for this guy in the right system. He is not the greatest route-runner but has great speed and could peel off long touchdowns given the opportunity and a strong quarterback. Realistically he would need to find the right fit and have a great pre-season to be a contributor for fantasy perspective early on. Due to his speed we like him as a dynasty prospect, but we wouldn’t be overpaying for the privilege of having him on our roster.

# 30 overall – Mitch Trubisky (QB –North Carolina) If your dynasty team has a Ben Roethlisberger or Carson Palmer type QB then this is a guy that you should consider drafting if he falls this far. Fantasy players tend to overdraft quarterbacks, however the dynasty player generally puts more value in the wide receiver position or wide receiver than the quarterback, and so there is a pretty good chance he falls to here. If he were to be drafted by a QB needy team (eg Jets or Browns) there is a chance he could start his rookie season. He does possess an ability to run and so this needs to be factored in when considering where to draft him. The big challenge for Trubisky will be his ability to transition from a primarily shot gun approach to a more typical NFL style offense under center, That being said there have been numerous examples of players being quick learners and demonstrating an ability to be under center with confidence despite not having regularly done so at college.

# 32 overall – Dede Westbrook (WR – Oklahoma) The biggest question mark about Westbrook is his size. He has shown speed and ability to put a double move on defenders, however it remains to be seen how he will stack up against NFL defensive backs and whether he can stay healthy. It’s likely that he will operate out of the slot in the NFL which should give him more opportunities in a PPR format. He could be a riser in the rankings if he goes to the right organization where he could be the 4th or 5th receiver and take over the slot role late in his first year or into his second year.