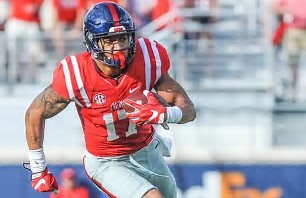 Last week we looked at predicting the first 12 picks in a Dynasty League rookie draft, using the projected landing spots of Todd McShay and Mel Kiper Jr as a guide, and discuss whether the projected spot is a good fit or not from an immediate, and long term dynasty perspective. We did incorrectly include Courtland Sutton, the very talented WR from SMU at the end of the first round of our mock draft but he is in fact returning for his senior year. As a result we included Samaje Perrine as the 12th overall pick and we have not seen anything that would lead us to change the thinking on the rest of the first round, however note that the first four selections of the second round could easily be solid late first round selections.

As mentioned last week the first four selections are the cream of this draft class. After that it feels like there are about 20 players that we wouldn’t criticize you for taking at whatever draft spot you have. We think there is a group of players we identified last week from picks 5 through 9 that are interchangeable depending upon team need and their landing spot, and then there is another break in talent before you get into a group of 6-9 players that it would come down to personal preference as to who you draft.

# 13 overall – Carlos Henderson (WR –Louisiana Tech) He had a great year at Louisiana Tech putting up huge numbers, and his ability as a returner on special teams should ensure that he gets some opportunity on game days. He seems to us to be a boom or bust player and if your league awards points for return yards he could be a solid target in the right situation. He is definitely a hold and see whether he is a Quinton Patton type player or progresses into a dynamic slot receiver like a Wes Welker type player.

# 14 overall – D’Onta Foreman (RB – Texas). His 40 yard dash at his pro day of 4.45 will have many over-drafting Foreman and he could easily go mid to late first round. We like him early to mid second round primarily because of his inability to effectively pass block which could limit his playing time early on in his NFL career. He is an interesting player from s dynasty perspective and one that could yield good value if you can draft him at the right spot.

# 16 overall – Zay Jones (WR – East Carolina) Here is a player that is all over the place in mock drafts. Fantasy owners tend to either love this guy and draft him late first or early second of they go in a different direction. He comes from a footballing family (his father was a LB with the Dallas Cowboys in the 1990’s), and was a target monster at East Carolina. The biggest question we have is his speed. His 40 time at the combine was 4.45 which is the same time Foreman ran at his pro day and he weighs a lot more than Jones. He could be a Brandin Cooks type player or become an Odell Beckham Jr type player in the right situation.

# 18 overall – Wayne Gallman (WR – Clemson) This is an interesting player to see where he ends up. Clemson had such a prolific passing attack that defenses tending to play the pass which left opportunities for him, although somewhat second fiddle to the passing game, add to that the mobility of Deshaun Watson and it would be easy to overlook Gallman on pure numbers alone. Watching the tape of this guy it’s clear that he runs hard and has the potential to be a 3 down back in the right situation which would certainly boost his draft stock in dynasty leagues.

# 19 overall – Evan Engram (TE – Ole Miss) This draft seems deep at TE position with O.J Howard, Engram and David Njoku being considered the big 3. There is a lot of chatter in the fantasy community that Engram will convert to WR in the NFL which could impact his draft stock due to the WR available. If he stays at TE and we can grab him here in the second round we would be pretty happy with that outcome.