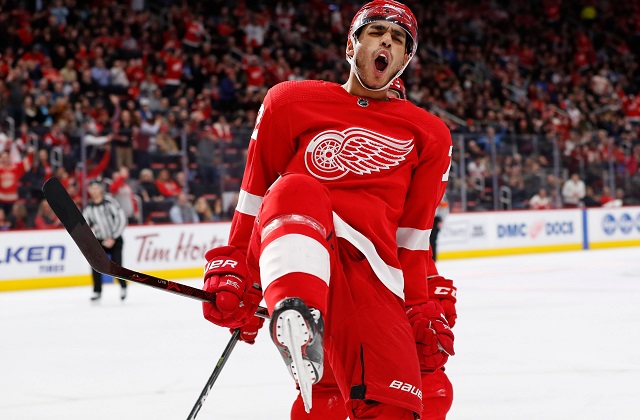 It's been just over a week since the NHL trade deadline.

Now that the smoke has cleared from a day on which over 30 trades were made, it's time to see which teams benefitted most from one of the most active trade deadline days in recent memory.

Oilers' general manager Ken Holland entered deadline day looking to add depth both up front and on the blueline.

He succeeded on both fronts, adding speedy forward Andreas Athanasiou and skilled utility forward Tyler Ennis up front. He then acquired veteran defenseman Mike Green from Detroit to add offense from the back end.

Unfortunately, Green suffered a lower body injury shortly after donning an Oilers jersey. He's out for 3-4 weeks, but his loss is tempered by the imminent return of D Oscar Klefbom and sniper James Neal.

The Oilers are now deeper across the board - and with Leon Draisaitl and Connor McDavid leading the way - they appear poised to take a shot at the Pacific Division title and have the potential to go on a long playoff run.

The overachieving Pens needed to bring in some help at the deadline, and did.

Couple that with strong play from Sidney Crosby (who found great chemistry with Zucker) and Evgeny Malkin, and the return of Justin Schultz and John Marino to the Pens' blueline, and you have a team that's capable of making some noise in the playoffs.

Boston - the NHL's current overall points leaders (96 points in 67 games) - were looking for a pair of forwards prior to the deadline.

Their wish list consisted of goal scorer who could take pressure off Marchand, Pastrnak and Bergeron - and someone who could add physicality while scoring the occasional goal.

They found both, grabbing forwards Ondrej Kase and Nick Ritchie from Anaheim in separate deals. This added depth could well propel the Bruins to another Stanley Cup final - and take them over the top this time around.


To the surprise of many, the Caps have been very good this season. With a good mix of veterans and young, talented players, they're a deep squad that plays a complete game.

Well, they got deeper at the trade deadline. Physical defenseman Brenden Dillon was pried out of San Jose, while sniper Ilya Kovalchuk was acquired from Montreal for next to nothing.

Look for Alex Ovechkin and company to make a spirited run for a second Cup in three years once the playoffs begin.

Despite their so-so record, the 'Canes are one of the NHL's better teams with an excellent goals for to goals against ratio, and a fast, talented team.

Somehow, they landed slick centre Vincent Trochek from the Florida Panthers to add scoring depth. They then got D Sami Vatanen from the Devils and D Brady Skjei from the New York Rangers to bolster a blueline that had been weakened by an injury to Dougie Hamilton, who was on his way to his best season ever.

Unfortunately, both Hurricanes' goalies - Petr Mrazek and James Reimer - were injured against Toronto after the deadline. Once they return - and if the 'Canes make the playoffs - look for Carolina to be a threat in the NHL's post-season derby.

Vegas is a bit of a sleeper, having gone about their business quietly on the way to the top of the Pacific Division under new coach Peter DeBoer.

The acquisition of Robin Lehner from Chicago - he was a Vezina Trophy candidate last year with the New York Islanders - and D Alec Martinez from Los Angeles (he's a former Stanley Cup champion) added significant depth in goal and on defense.

A deep playoff run isn't out of the question for the Knights with their goaltending tandem of Lehner and Marc-Andre Fleury - and a fast, talented forward group.

Toronto Maple Leafs: The acquisition of G Jack Campbell and gritty forward won't make a big difference for the talented but soft Leafs. They may make the playoffs, but won't make it past the first round.

Vancouver Canucks: While the addition of F Tyler Toffoli (via the L.A. Kings) was a good one, the young, talented Canucks will need to gain more experience before making waves in the playoffs - if they make them.

Calgary Flames: The addition of Erik Gustafsson and Derek Forbort on defense wasn't enough. Suspect goaltending and a talented yet gritless group of forwards won't cut it once the intensity ratchets up in the playoffs.

Savvy moves could propel teams to playoff (and some individual) success. Those with the greatest depth will go furthest in the playoffs on the strength of good goaltending and consistent point production from their best players.