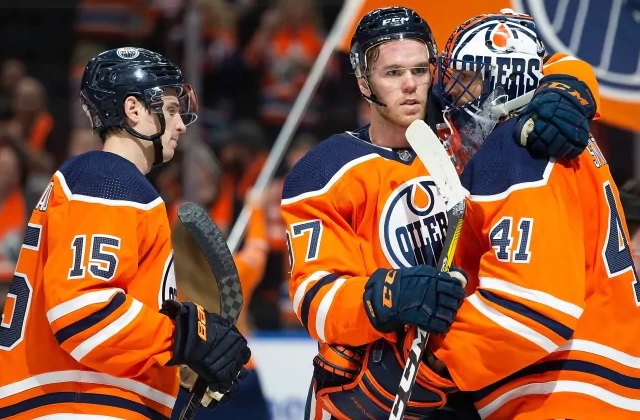 It's mid-November, and the NHL's regular season schedule has hit the quarter pole.

Some teams - like last year's Stanley Cup finalists, the St. Louis Blues and Boston Bruins - have performed as expected, while others have underperformed or overperformed.

Here's a look at a cross-section of teams and how their hot, cold - or tepid - first 20 games has affected the performance of players from stars on down to third-liners expected to put up 20 points per season.

Edmonton Oilers
The Connor McDavid-led Oilers are perhaps the season's biggest early season surprise.
Six games over the .500 mark at 20 games played, McDavid and his high-scoring partner in crime Leon Draisaitl have accounted for 75 per cent of the Oilers' scoring. Meanwhile, goaltenders Mike Smith and Mikko Koskinen have combined for a save percentage of .920 and goals against average (GAA) of under 2.40.

Verdict: This won't continue. There's no scoring depth behind McDavid and Draisaitl, save Ryan Nugent Hopkins, and Edmonton's defense is suspect and offensively challenged. Expect McDavid and Co. to come back down to earth. Do not pick any forwards or defenseman as replacement players!

Montreal Canadiens
Almost unbelievably, the Habs are nipping at the heels of the Bruins for first place in the Atlantic Division.
At present, they're averaging 3.4 goals per game by dint of excellent scoring depth. All-world goalie Carey Price has also been his usual self, and the Canadiens' powerplay is 14th in the league after finishing at the bottom last year.

Verdict: Montreal should sustain their solid start. Players like Joel Armia and Nick Suzuki are benefitting from lots of ice time and would make good supplementary picks. Back-up goalie Keith Kinkaid has also been solid.

Washington Capitals
Few predicted that the Caps would have only two losses in their first 20 games.
Ovechkin and company are scoring lots of goals, their goaltending has been sound and defenseman John Carlson is a leading Norris Trophy contender with 30 points in his first 20 games.

Verdict: The Great 8 and company are the real deal. Ice time is being spread out, so players such as Jakub Vrana, T.J. Oshie and Lars Eller are going to get their fair share of points. In goal, young Ilya Samsonov is an up-and-comer who's put up solid numbers in net thus far.

New York Islanders
The Barry Trotz-led Isles not only win by committee but score by committee.
While they're not going to score a bucket load of goals, they have many good players sprinkled throughout their line up - Anders Lee, Jordan Eberle, Josh Bailey, Brock Nelson - who will put up decent offensive numbers. Goalies Thomas Greiss and Semyon Varlamov should make good supplemental picks.

Verdict: Expect the beat to go on for the lunch pail Islander brigade.

Dallas Stars
While they can keep the puck out of their net, they can't score, even though they have high-powered forwards such as Tyler Seguin, Jamie Benn, Joe Pavelski and Alex Radulov. A mobile defense led by the injured Jon Klingberg and talented sophomore Miro Heiskanen is also underperforming.

Verdict: Decline any chances to pick up a Dallas Star, as the team is in offensive disarray. G Anton Khudobin could be a good supplementary pick in net.

San Jose Sharks
The Sharks stumbled out the gate and are still two games under .500 at the 20-game mark.
Losing Joe Pavelski and Joonas Donskoi hurt their scoring depth, and C Joe Thornton's productivity continues to drop.
Meanwhile with young forwards Timo Meier and Tomas Hertl are still finding their way, defenseman Brent Burns and Erik Karlsson can't be expected to score and prevent goals. Finally, G Martin Jones has been awful in net.

Verdict: Don't buy any stock in Sharks players right now; wait to see if the team is able to pull itself out of its freefall in the next few weeks.

Los Angeles Kings/Minnesota Wild
At present, both squads are sitting at the bottom of their respective divisions.
Why? Well, the Kings are old, and the Wild are a team with a mix of old and young players that has no identity. Both teams have capable goaltending, but their lack of punch up front means they have to win games 1-0 and 2-1, if they win at all.

Verdict: Not much to pick from here. Maybe F Anze Kopitar and D Drew Doughty on the Kings; possibly Eric Staal and Zach Parise on the Wild. Devin Dubnyk, Minnesota's starting netminder, could also be a good supplementary pick if he's available.

Tampa Bay Lightning/Toronto Maple Leafs/New York Rangers
While it looks like the Lightning are still suffering after-effects of their first-round playoff exit last year, expect them to be there in the end. Lots of scoring depth there along with good goaltending. Good supplementary picks up and down the line-up on forward and defense, plus G Curtis McIlhenny.

As for the Leafs, they're talented but soft. In a nutshell, they can score but have a hard time keeping the puck out of their net. Star winger Mitch Marner is out for a month, captain John Tavares is struggling, their defense lacks depth and they have no reliable back-up goalie. Expect their struggles to continue and pick accordingly: if available, forwards Ilya Mikheyev and Kasperi Kapanen are worthy adds.

The Broadway Blueshirts - who added D Jacob Trouba, star F Artemi Panarin and second-overall draft pick Kappo Kakko in the off-season - have been mediocre at best in the early going. The overrated Trouba has been so-so, Panarin has been inconsistent and Kakko is still learning. A team in transition to say the least, think long and hard before picking a player down the line-up and avoid picking Lundqvist or Georgiev in net.

In the final analysis, base supplementary picks on team performance and how much ice time players are getting. Do that, and you should find some much-needed value in those picks.