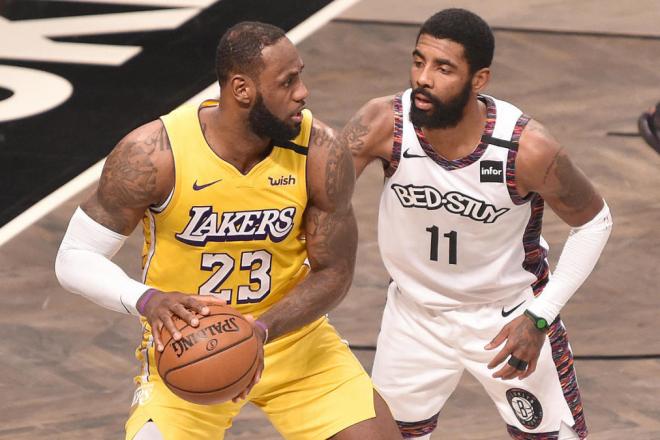 If you were to go by the betting odds, the 2022 NBA Finals will be a battle between the L.A. Lakers and Brooklyn Nets.

There are three reasons on each team why both teams are such heavy favorites. On second thought, make those names on each team.

Following the Nets' example, the Lakers acquired Russell Westbrook from the Washington Wizards to create their own big three. Don't look now, but Mr. Triple Double is now joining LeBron James and Anthony Davis in Hollywood.

At the opposite side of the country is the Nets' big three, Kevin Durant, Kyrie Irving and James Harden.

As formidable a trio as they are, they somehow didn't make the 2021 NBA Finals, as a team led by Giannis Antetokounmpo somehow dispatched the Nets 115-111 in OT in game seven of the eastern conference semifinal.

Led by the Greek Freak, the Bucks - with contributions from the likes of Jrue Holiday, Khris Middleton, Bobby Portis and Brook Lopez - not only competed with the Nets, but beat them.

In essence, the Bucks got contributions from more than one player. And while Giannis was the straw that stirred the drink with his dynamic, emotional play, Holiday and Middleton - and others - provided the balance required to prevail in a long, tough series.

Which is to say that while the Bucks may not have been the most talented team on the court, they were the most well-balanced team. If Giannis went cold, Middelton would step up. And if those two went into a short hibernation, Holiday would assert himself, both offensively and defensively.

No egos were involved. If someone was open - say, Lopez or Portis - they got the ball and made key shots that helped pave the way to winning tight games.

As good as the Lakers' and Nets' big threes are, here's the issue: they all have egos. And they all want the ball.

There may be a reason why both Harden and Westbrook have yet to win a title: their style of play, while undeniably dynamic, is individualistic.

On the other hand, LeBron - as much as he can take over a game - can also be a distributor. He has had no problems setting the table for Davis.

The same goes for Irving.

While he can dissect defenses with his quickness and incredible crossover move, he can also get the ball out to Durant for him to work his scoring magic. He has the ability to set his ego aside in order to win. Same goes for Durant, who proved that during his time in Golden State.

Sadly, both Harden and Westbrook have yet to prove that.

Consequently, teams like the Atlanta Hawks, Bucks, Warriors and Dallas Mavericks still have a chance because they opt to try and win with a well-balanced approach. With everyone contributing - and playing without their ego getting in the way - even lesser lights can help produce wins by contributing at key moments.

As good as the Lakers and Nets figure to be in 2021-22, there are other teams who have a legitimate chance to take home an NBA title.