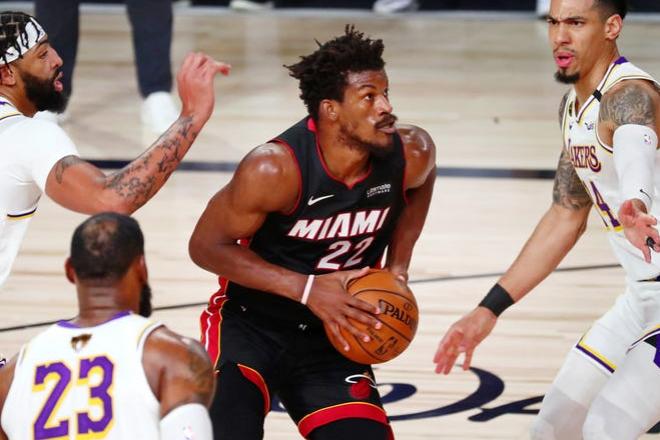 The Los Angeles Lakers opened the series as overwhelming (-340) favorites to win their 17th NBA Finals and tie the Boston Celtics for the most titles in league history.  The oddsmakers were looking like they knew what they were talking about two games into the best-of-seven game series, but the Miami Heat showed the naysayers they will not be going away quietly in the last outing, taking the favorites down by 11 points.  The reality is that if this were a normal season (not that there has been anything normal about this season, nor 2020 for that matter), the teams would be holding serve with LA winning the first two games at home, and Miami doing likewise in Game 3.  Whether or not this is the midway point of the series remains to be seen, but if the Heat can stay scrappy enough to hang around while they get healthier, we may have a series on our hands yet.

Game 1 could not have gone much worse for the Heat. Not only did they get shellacked, but even with LeBron James (58.3 DK FP) playing one of his worse halves of the playoffs, Miami still managed to find themselves down by 17 at the break.  The Heat also lost two key players along the way. Goran Dragic (15.3 DK FP) left in the second quarter with plantar fascia and has not played since.  He said his chances of playing in Game 4 are low, which means we should continue to see increased minutes from Tyler Herro (23.5 DK FP) and Kendrick Nunn (28.3 DK FP).  To make matters worse, Bam Adebayo (13 DK FP) aggravated his shoulder strain and left in the third quarter.  Adebayo will be listed as questionable for Game 4 on Tuesday but says he is continuing to get better.  Anthony Davis (59.3 DK FP) had a coming out party and James stepped up his game in the second half as the Lakers rolled to a 116-98 victory.

Game 2 was much of the same.  Miami was noticeably short-handed without Dragic and Adebayo and trailed by 6 after one quarter of play, and 14 at the half en route to a 10-point loss. It was the James (63.3 DK FP) and Davis (55.3 DK FP) show again as the two combined for 65 points and 23 rebounds.  Jimmy Butler (56.5 DK FP) did his best to keep his team competitive, scoring 25 points while adding 13 assists and eight rebounds, but the Herculean effort from Jimmy Buckets just was not enough as LA jumped out to a 2-0 series lead.  Herro (29.8 DK FP) and Meyers Leonard (9 DK FP) took Dragic's and Adebayo's starting spots for the game, and the team got big efforts from Jae Crowder (24.8 DK FP) and Kelly Olynyk (38.8 DK FP) off the bench.

Game 3 was different from the get-go, and we got or best fantasy performance from anybody in the series to this point.  Butler (83.3 DK FP) messed around and got a triple-double.  Jimmy Buckets dropped 40 points on the Lakers, had 13 dimes, 11 boards, and added two steals and two blocks to boot.  His performance was just the third 40-point triple-double in finals history.  Davis finally cooled off, scoring just 15 points, while James tried to shoulder the load with a 25-point, 10 rebound double-double performance.  Kyle Kuzma and Markieff Morris both came off the bench to score 19.  The Los Angeles starters were outscored 89-51 as Miami seemed determined not to go down 3-0 in the series.

Looking Ahead: Coming into the Finals, the DFS rankings were pretty clear.  DFS options 1A and 1B were James and Davis, while the consensus for players 3-6 were Butler, Adebayo, Dragic, and Herro.  While the first part of that has rang true, the second tier has been adjusted somewhat due to injury, and partially due to outstanding play from role players like Rajon Rondo (averaging 31.5 DK FP in his last two contests), Olynyk (35.5 DK FP in his last two).  Some things to keep in mind are that all three of Miami’s previous NBA titles came after the Heat dropped Game 1 of the Finals, and the last time they were ever down 2-0 in the finals was in 2006 when they came back and beat the Maverick’s for their first Larry O’Brien Trophy.