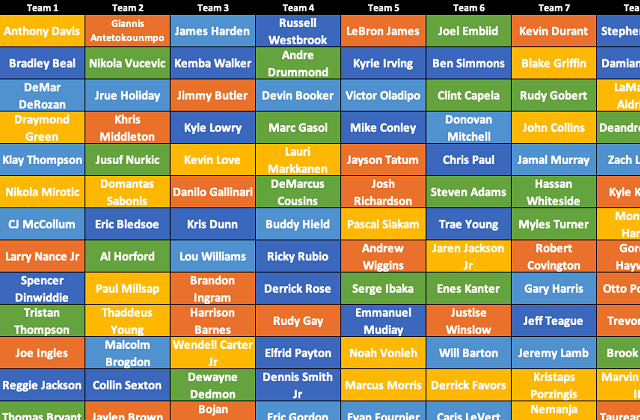 Why You Should Play Fantasy Basketball

The NBA season starts in less than 2 weeks, and the air is pulsating with the sound of dribbling basketballs. The fantasy basketball season is here now!

So here’s a question I hear periodically  I’m already in a fantasy football league, why should I play fantasy basketball? Well, let me give you a few reasons... Fantasy football ends in early December, unless you’re skillful and lucky enough to make the playoffs and play for a trophy or cash, then you gain - an extra couple of weeks. After that it’s a long way till your next fantasy draft. And drafting is one of the most fun things to do in fantasy sports!  What beats getting together with your in-town buddies, or your online buddies, and talking some real smack about making that great pick, or laughing when someone takes a player you’ve labeled as a total bust!  There's nothing like going into a fantasy draft with your own list of All-Stars, Sleepers, and Don’t Draft Busts - knowing you’re going to blow out the rest of the league with your brilliance!

Fantasy basketball has all of the same qualities that people love about fantasy football: active participation, building teams that give you a reason to care about the results of every game, creating conversation pieces that a group of friends (or strangers) can bond over, and generating the perfect trash-talking opportunities and chances to show that you’re secretly a sports whiz who gets great results for doing a solid job.

You’re worried that fantasy basketball is too time consuming, and there are just too many games per week? Well there are a variety of league types you can choose, from Daily to Weekly. Voila, in a weekly league you won’t have a heavy time commitment problem.  That’s right, you can play in a weekly league where you set your lineup in advance of that weeks’ games. Once your weekly lineup is set, it doesn’t change and no one else’s lineup changes either. Yes, there are more games each week, but you only have to spend part of one day setting your lineup for them. And after you do, you’ll have more personal interest in the week's contests, because you “have skin in the game”.

So talk to your friends, go online, do some research and find the perfect fantasy league for you. Whether it’s a pay league or a trophy league, a daily league or a weekly league, a standard league or an auction league – you won’t regret it! And I’ll be right here at Advanced Sports Logic with analysis and tips like this one: Trae Young is going to have a breakout year, grab him anywhere in the second round!