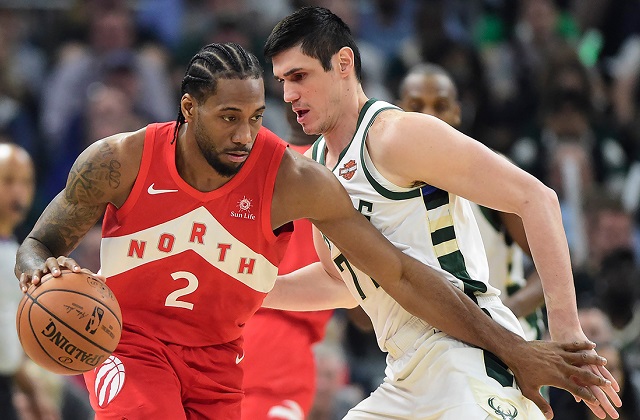 An earthquake hit the NBA – and I’m not talking about the one that caused the scoreboards at the NBA Summer League Games in Las Vegas to sway back and forth! No, I mean all the movement of superstar players that happened just after the NBA free agency deadline opened. So now it’s time to let the dust settle and see which teams and players will be jumping to the top of the league once the regular season begins in October.

So now, after that earthquake, it looks like most of the teams in the league are about to be hit by a runaway championship train that’s headed for Los Angeles! Each Los Angeles team currently has two superstars – the Lakers LeBron James and Anthony Davis, and the Clippers Paul George and Kawhi Leonard.  And the consensus is that those two teams are the favorites to take home the NBA trophy at the end of the playoffs!

You ask - what about last years’ two finals opponents? While the Lakers and Clippers gained by addition, unfortunately the Toronto Raptors and the Golden State Warriors both suffered by subtraction. The loss of Kawhi Leonard, the Finals MVP, was devastating to the Raptors and now they’re not even favorites to win the East, let alone the Finals. And the Golden State Warriors, thanks to the devastating injuries to Kevin Durant and Klay Thompson in the playoffs, are not even considered one of the top 3 teams in the West. Durant has signed with the Brooklyn Nets, and Klay Thompson isn’t expected to return until March, putting the possibility of the Warriors gaining a record sixth straight trip to the Finals in serious jeopardy.

But another team that gained from free agency, the Utah Jazz, after acquiring Mike Conley and Bogdon Bogdanovich, will provide stiff competition for the two Los Angeles teams. And don’t forget about the Houston Rockets, now led by possibly the best backcourt combination in the league – James Harden and recently acquired Russell Westbrook. If those two former MVP’s can learn to share the ball together, Houston will also be a title contender.

In the East, the Toronto Raptors without Kawhi will barely be able to scratch out home court advantage in the playoffs, let alone make the finals.  And the Milwaukee Bucks is another team that suffered from subtraction – losing a key back court player in Malcolm Brogdon. Of course the Boston Celtics lost Kyrie Irving and Al Horford, and they’ll have a hard time filling those two slots with similar All-Star caliber players. The Philadelphia 76ers, although they added Al Horford, also lost Jimmy Butler, and he was a key part of their success last year. So the East looks more wide open than the West, but the teams there don’t seem to have the star power to knock off any of the Western teams they might face in the Finals.

But there’s still a long way to go before the regular season starts, and more player movement could be happening during the Exhibition Season. Teams should have a better idea as to what their strengths and weaknesses are, and we might still get an after-shock or two from that first quake.