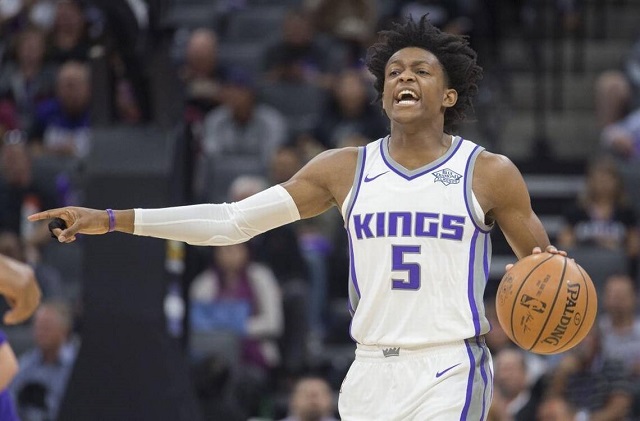 The NBA Summer League gives us fans and fantasy owners a chance to watch players who were high draft picks and became instant millionaires compete against players who have minimal chances of making an NBA team. Because of this disparity, it’s often “buyer beware” in terms of assessing how well these potential future fantasy stars will perform during the regular season.

On the other hand, the Summer League standout from 2017, Donovan Mitchell, went on to become the only first-year player to truly challenge Ben Simmons for Rookie of the Year honors. Mitchell was not even selected in many fantasy drafts; I picked him up on waivers for one of my teams, and he paid big dividends all season, especially during the fantasy playoffs.

-- De'Aaron Fox played in only the Sacramento Kings' first Summer League game because he clearly proved that he’s made such a big leap forward that the Kings don’t want to risk injury with him before the season begins. With Fox in the lineup, the Kings are a bullet train running up and down the court with purpose and style. Without him, the train has no engineer and plods along clumsily while trying to make set plays work. Fox has all the tools -- scoring, 3-pointers, assists, steals -- and is the dominant ball-handler for the Kings. He can be among the top 10 point guards next year.

-- John Collins showed potential as a rookie with his shot-blocking and rebounding. But during Summer League, the big man is displaying a scoring touch, even as a 3-point shooter. In the ever-changing NBA, he’s a modern type of stretch center who can run the floor and knows how to switch on defense. I expect the Atlanta Hawks to feature him in their offense and that his rebounding and shot-blocking will only improve.

-- Jonathan Isaac missed much of his rookie season with the Orlando Magic due to injuries. But when he did play, he averaged 2.2 steals and 2.0 blocks on a per-36-minute-basis. In Summer League, he’s also developed a solid scoring prowess and is registering even more blocks. All he needs is playing time, although that might be hard to get with Nikola Vucevic and Aaron Gordon ahead of him on the power forward depth chart.  Still, he might get some good playing time early on as lottery pick center Mo Bamba will take time to develop. Isaac is a legit fantasy sleeper.

-- Now on to the rookies. This year's top two draft picks, DeAndre Ayton and Marvin Bagley, have both looked extremely good in a variety of ways, with Ayton being the better of the two. Both big men are agile for their size, have shown that they are good rebounders and shot-blockers, and have demonstrated quick footwork and versatile scoring skill sets. At age 19, they’re just beginning to fill out their frames and develop NBA-ready bodies, yet they’re already quite imposing in the paint. Yes, there are other rookies with great potential for dynasty leagues, but Ayton and Bagley happen to be on teams -- the Phoenix Suns and the Sacramento Kings, respectively -- that will feature them in their attack right away.

Editor's note: It was announced Monday night that Bagley will miss the remainder of Summer League play due to a bruised pelvis. He is expected to rest for up to two weeks before returning to basketball activities.

While there are no guarantees on how quickly players develop, I believe the above five players should be seriously considered in the middle rounds of dynasty leagues and in the mid-to-late rounds of redraft leagues. Of course, they may take time to develop, but come your fantasy playoffs, they could boost your championship chances substantially. Only time will tell, but if you do pick up the next Donovan Mitchell ahead of your league rivals, you’ve taken a big step toward getting that ring at season's end.