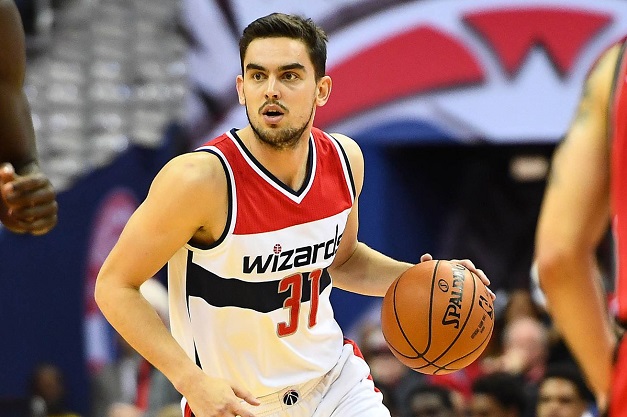 Welcome to Week 19, that disrupted half-week that kicks off the second half of the NBA season after the All-Star break. Your Daily Fantasy Sports Bargain Report selects two lower-priced players plus one “cheapy” sleeper pick that can help put you over the top in your DraftKings and FanDuel contests. REMEMBER - Before selecting any player, make sure they are scheduled to play on the night of your contest.

Folks, Can we talk? John Wall is NOT playing and while the cat is away, the mouse will play. As long as Tomas Satoransky is playing starters minutes, he’s the daily fantasy bargain that will keep giving. Satoransky started stuffing the stat sheet as soon as he surpassed the 30-minute mark. Since Wall went down on Jan. 25, the Czech is averaging 16 points, 7 assists and 2.7 treys per game. This $5,900 price tag won’t be around for much longer, but DFS is all about finding the player who is blowing up before they raise the price. The Wizards play Cleveland on 2/22, Charlotte on 2/23 and Philadelphia on 2/25.

Once George Hill packed his bags for Cleveland, Bogdan Bogdanovic became the big man on campus in Sacramento. He was also the sniper that helped Team World blow out Team USA during All-Star Weekend, scoring 26 points after connecting on seven long-distance 3-pointers. Just like Satoransky, Bogdanovic is packing the stat sheet night in and night out. He’s cracked double-digit points in five straight games, has hit at least three 3-pointers in four of his last seven games and is also averaging 5.14 assists and 1.5 steals over that time span. What are you waiting for? The Kings play OKC on 2/22 and the Lakers on 2/24.

We all know who JR Smith is and we can all agree that he has been a disaster this season for the Cleveland Cavaliers. But what many people haven’t noticed is that he is playing well for the first time all season and at $4,800 could be a real asset for your DFS team. He is what we like to call a high-risk, high-reward daily fantasy play. Coming into the All-Star break with the “New-Look” Cavaliers, he was the 21st-ranked player in 9-category fantasy basketball leagues. Except for a clunker on Feb. 9 against Atlanta, Smith has been shooting 3-pointers at will, connecting on 4, 6, 3, and 6 treys in four of his last five games. Smith can’t keep up this pace, but daily fantasy players need to ride him until he flames out. The Cavaliers play Washington on 2/22, Memphis on 2/23 and the Spurs on 2/25.