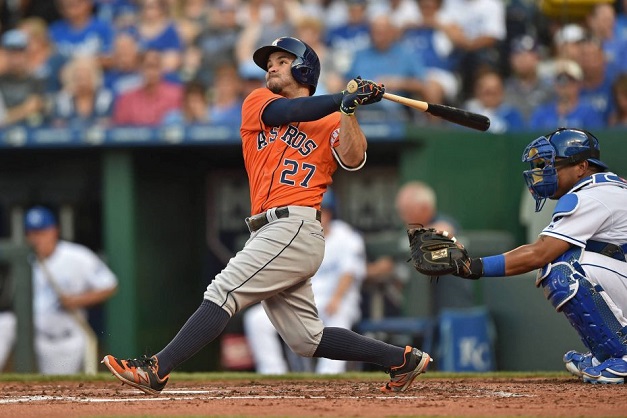 Here is a quick list of the top 10 second basemen for points leagues.

It's not a matter of if Altuve should be the top second baseman in drafts but rather should he be the top player overall in drafts.

Schoop was the No. 5 second baseman last year and entering his age-26 season, he's becoming a better hitter. He's swinging at much fewer pitches out of the strike zone while seeing his homer total rise significantly. He probably won't ever be a .300 hitter, but a 35-homer, 110-RBI season in 2018 can be assumed.

I think we've seen the best of Gordon, but 60 steals, an easy .300 average and 110-plus runs are nothing to scoff at. He will gain center field eligibility after the first two weeks of the season.

I'm a little wary of Murphy, who underwent knee surgery in October and may not be ready for Opening Day. I know that's only one game out of 162, but is that all he'll miss? And even if so, how much time will he need to knock off any rust? Plus, Murphy is entering his age-33 season. On the positive side, he is in the middle of one of the game's best lineups and was still a top-five fantasy second baseman despite missing 18 games last year.

Gordon's presence will enhance Cano's RBI total. He's gradually wearing down as a hitter, but he also deserved a little better luck last year after posting a .280 average, a nine-year low, despite logging a fantastic 12.7 soft-hit percentage.

LeMahieu won't win you a fantasy championship, but he will help you out across the board with perhaps double-digit homers, a few steals, near 100 runs and an average above .300. As expected, he could not repeat his amazing 2016 campaign but was still fantasy's ninth-best second baseman last year in points formats.

Odor's BABIP last season was .224. That's bound to improve, so while he will continue to bash 30 homers and rack up double-digit steals, look for Odor's average to rebound to about .250 this season. He's a solid value pick.

Can Merrifield really hit 19 home runs again? He never hit more than eight during his seven seasons in the minors, so color me skepical. Plus, his other counting stats are going to slump simply due to the fact that the Royals' lineup has been gutted. I'm expecting a regression. Still, 10 or so HRs with 30 stolen bases is not bad.