However, as a stepping stone to the ASL restart we decided to build our Daily Fantasy Sports Lineup optimizer first, believing it would be a simpler product and year-round revenue. However, I never really played in Daily Fantasy Sports except a small amount of dabbling in it in 2015, at which time I quickly lost $190.

With the ASL DFS Lineup Optimizer finally maturing as a product (and it isn't perfect yet but it has powerful features you won't find anywhere else), I finally started playing again in September using our optimizer. On the last day of September, my account was at $8.02. Without adding funds to the account, on the last day of December it was at $44.72, a 5.5x growth, as shown on the graph below: 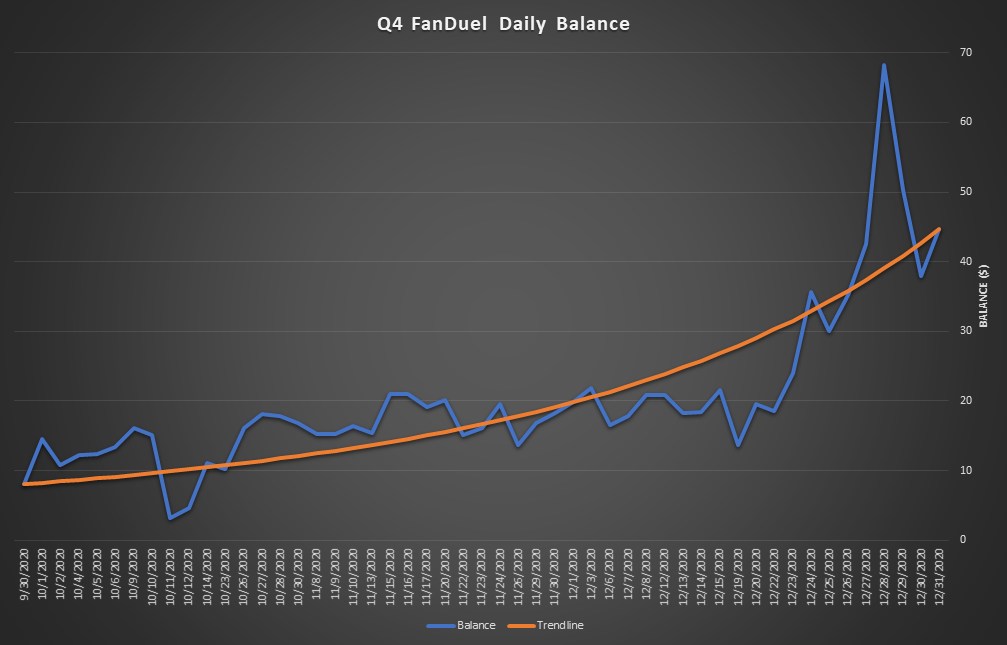 I believe this success is sustainable over the long term. I have been learning as I have been going, and now that the NBA season is here, and I can enter contests everyday, it seems the account is growing faster.

The ASL DFS Lineup Optimizer is really a tool box. You can't just press a button and expect to win in Daily Fantasy Sports. It is important to have a strategy and play consistently.

Here are the rules and practices I have set for myself that I believe have helped me win.

Rule 1: The first rule is about managing the "bankroll", and the key is not to run out of money! To protect the bankroll, I typically only enter 5% of my FanDuel balance in any one contest, and I have a hard maximum of 10%. I am not quite as conservative as I could be because I also want the account to grow. I count the money invested in fees in upcoming and live contests as part of my bankroll. For example, I might have a $5 balance, but $10 in fees for upcoming contests, and $10 in feels in live contests. In that case, I consider my bankroll to be $25, and will typically still spend between $1.25 to $2.50 per additional contest.

Yes, it's true that if I lost all the contests I entered on a single day, I would lose just about everything, so there is risk, but it is a lot lower risk than putting it all in one contest. (And if you read my article, A Winning Mindset For Playing DFS, you know that I only put money into my FanDuel account that I am willing to lose. If I lose everything, I will put another $10 in the account at the start of the next quarter, so worst case, I can't lose more than $40/year.)

Rule 3: I don't play in the ticket contests - cash-in cash-out only! I also don't play in the "Small Fadeaway (Everyone Wins)" contest. FanDuel takes about 20% per contest, but on the Fadeaway contests, since the entry fee is $0.25 per lineup and everyone is guaranteed to win $0.10 per lineup, then the real entry fee is $0.15 per lineup and the amount of money that is actually in play for winning is much smaller. Doing the math on these contests, FanDuel is actually making about 32.5% per contest, so I avoid them because it makes winning in harder.

Rule 4: When I see what contests are available within a slate I follow these rules:

For example, let's say my maximum fee budget is $3 per contest. Here is the order that I would enter today's (Jan 2, 2020) contests available in the Main NBA Slate:

This contest is perfect. I can enter up to 12 lineups for $3.

This contest is good too. I can enter up to 60 lineups for $3, but that is more than I will enter because I follow a strategy that I call "Natural Diversity" (which I explain in Rule 5.

This is another good contest to enter because although I can only enter a single lineup based on my fee budget, it is a multi-entry contest, and thus there will likely a lot of diversity in the other lineups. One of the diverse contests might win the big payout, but my one lineup is likely to rank higher than in a single-entry contest because of the diversity.

I will enter this contest, but as a last choice. Now I am just entering my one best lineup against everyone else's one best lineup, and don't have any additional advantage beyond the quality of the projections or if anyone is playing without using an optimizer.

Rule 5: I use a strategy called Natural Diversity, which I explain in this article. The basis of it is that I keep running the multi-lineup generator until I find the point where the total number of unique players equals the number of lineups. I shut off Auto Max Exposure, Auto Min Exposure and set Auto Diversity Bonus to 0% (See details in the aforementioned article.) A typical strategy is to force diversity and enter 150 lineups to try to hit one of the top rankings in the contest and get a big return. My strategy is more around consistency and rather than trying to have the best chance to win the top spot in a contest (at the cost of usually losing money), I am focuses on smaller consistent wins, while still having a chance to win the top spot in a contest. These two results in the same contest illustrate what I mean:

A friend and I were comparing notes on our December 30 NBA Main slate results. He entered 150 lineups in the $0.05/lineup contest. He just about broke even, losing $0.10. He sent me the above image from his iPhone.

It turns out we had entered the same exact contest. However, based on Natural Diversity I only entered the 17 best lineups. (Generating 17 lineups with all diversity settings off caused the multi-lineup generator to use 17 unique players - that's the point I call Natural Diversity.) Since 17 x $0.05 is only $0.85 and my budget per contest was higher, I entered each lineup twice. (I could have gone higher, but twice per lineup is my max - make that Rule 5b!). So my total entry fee was $1.70, and my winnings were $3.76, or a $2.06 net gain. I more than doubled my money - sweet! My friend had 150 chances to win 1st place in the contest, compared with my 17 chances, but the tortoise marched on while the hare went nowhere.

Rule 6: Always download the player list from the FanDuel site, even when entering a single lineup in a contest. ASL is continually improving the DFS Lineup Optimizer, but from time-to-time a player will have a wrong position allocation. Even if this doesn't cause an invalid lineup, it can cause a player to be missed in the lineup recommendation. For example, if the player is an designated as an SG, but was wrongly designated an SF, he might not be the best SF for a lineup, but he might be the best SG for a lineup. Reading the player list ensures I always have accurate player position information in the optimizer. (If there is an issue with a player salary, you can fix that by setting it with the Custom Projections option.)

Rule 7: This goes without saying, but always check player status right before the games. Even players that were designated as healthy and ready to play can sometimes be ruled out right before a game. As an ancillary to this, if possible, enter your lineups early in the day. Many of your opponents might forget or be unable to check status right before the games, so you get an extra advantage by setting your lineups early, but rerunning the optimizer and doing a CSV edit right before the slate starts. One of my best days was the 2nd day of the NBA season, where my account doubled in a single day. (You can see the spike on the graph above.) I believe the fact that the HOU/OKC game being cancelled might have played a roll in that. I had entered my lineups early that day, but reran all of them after the game was cancelled. I didn't have a single big win, but just about every contest I entered won. Here is an example scatter gram of one of those contests:

Rule 8: Set your rules, for how much you will spend, how often you will replenish your account, and when you will cash out. My rule is to either replenish or cash out half my winnings at the end of each quarter. So yesterday (January 1) I did exactly that - cashed out half my winnings. It isn't much, but it is enough to buy a bottle of wine or a steak to celebrate my wins. Playing responsibly is what keeps it fun. When you set rules for yourself, stick to them, and then you won't get into a stressful situation.

I don't plan to write regular DFS articles - going to be hard at work rebuilding The Machine very soon. However, I will report on any major new findings or improvements, and I also play to report at the end of each quarter to summarize how my own DFS play panned out.

We are constantly improving the ASL DFS Lineup Optimizer. To see known issues and their workarounds, or to see what we are working on next, visit our FAQ page.