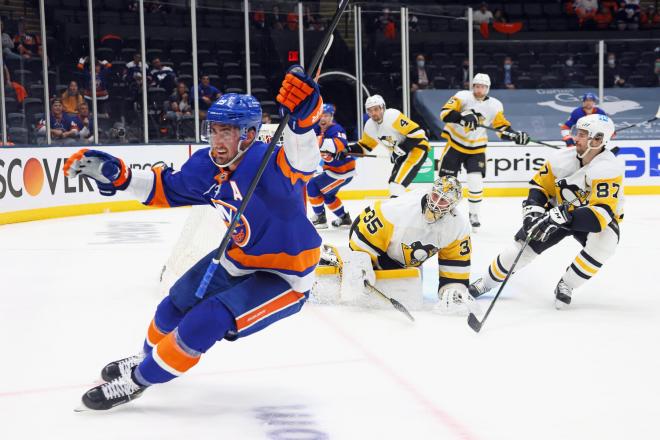 As the saying goes, the best-laid plans - or in this case, predictions - often go awry.

Such is the case with the NHL playoffs to this point.


Let's start with the first-round matchup between the Pittsburgh Penguins and New York Islanders. Entering the playoffs, Sidney Crosby & Co. were on a run. Well, the gritty Islanders rudely cut that run short.

In a series that was really too close to call, the Islanders simply ground the Penguins down and ousted them in six games despite being a team (with apologies to forwards Mathew Barzal and Brock Nelson and D Nick Leddy) largely bereft of star power.

Then, there is the Edmonton Oilers.

Heavy favorites to oust the Winnipeg Jets, they were swept out of the playoffs by a determined Winnipeg team - three games went to overtime, including the deciding fourth game - that largely kept Oilers' stars Connor McDavid and Leon Draisaitl in check.

However, there is a silver lining: the Jets are loaded with offensive talent up front. Take your pick, from wingers Blake Wheeler, Kyle Connor and Nik Ehlers, or centers Mark Schefele and Pierre-Luc Dubois.

They also have excellent secondary scoring in the likes of Andrew Copp, Adam Lowry and Mason Appleton. Rearguards Josh Morrissey and Neal Pionk - who both log better than 20 minutes per game - can also be relied upon to add points from the blueline.

And what of the Washington Capitals being dispatched by the Boston Bruins?

Well, it's really no big deal.

No sweat, as the Bruins have the Perfection Line: Brad Marchand, Patrice Bergeron and David Pastrnak. They also have excellent secondary scoring with forwards David Krejci, Jake DeBrusk and Charlie Coyle contributing key goals. Defensemen Charlie McAvoy and Matt Grzelcyk are also reliable point producers from the back end.

The last remaining first-round series - the Toronto Maple Leafs vs. the Montreal Canadiens - could prove to be problematic if the low-scoring Canadiens prevail in their game seven showdown Monday night.

The best picks for the Habs are Brendan Gallagher, Tyler Toffoli and Josh Anderson in an offensively-challenged line up.. Even then, they haven't been producing at the same pace they did in the regular season, especially Toffoli.

The two upcoming series - Avalanche vs. The Golden Knights and Boston vs. the Islanders - figure to be tooth-and-nail affairs.

Look for the Avs to take out the Knights and Bruins to take care of the Islanders. Should those series go according to form - and from a pool perspective, let's hope they do - there will be plenty of offensive talent to choose from with Boston and Colorado.

If they don't go to form, then pickings will be slimmer, and there will be interesting choices to be made!