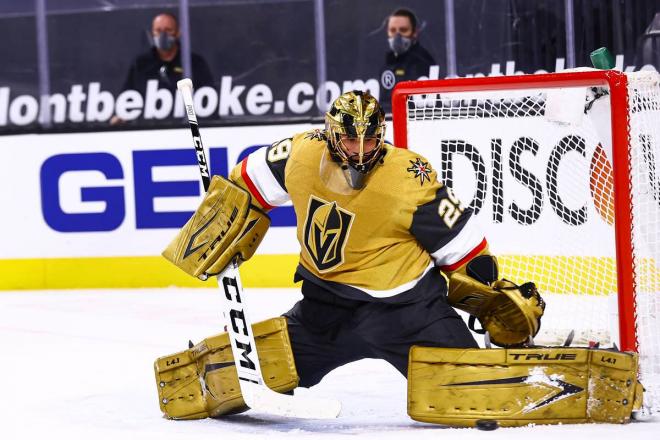 Well hockey fans across the nation let's start the day and forget about all our worries and replace those thoughts with fantasy hockey thoughts.  Just imagine building your daily line up and cashing in or watching your players light the lamp during the Saturday Night games.

We all dream of the super winning lineup so let's make today the day where we build and create the Super Team.  I am going to focus on providing players that have everything you need and want going into tonight's games.  From overall costs to FPPG I believe this is going to be a Super Night.

Starting in net for me tonight is an ageless wonder, Marc-Andre Fleury of the Vegas Golden Knights.  At 36 years young Marc-Andre is playing like he is 25 years old again.  He has posted 2.06 GAA and a save percentage of .926 and he is averaging 21.8 FPPG.  "SUPER" is the only word we are focusing on today and he is my SUPER GOALIE

On the Blue line for tonight's games are two Super players based on Fanduel cost.

John Klingberg of the Dallas Stars is one of my SUPER plays on the blue line tonight.  A super cost of $5300 brings extreme value for this player.  John has 7 goals and 25 assists while averaging 11.3 FPPG.  Take this player and add him to your Super Lineup tonight.
Jakob Chychrun of the Arizona Coyotes:  Jakob has been a super player all year. I have mentioned him in past articles and for super reasons.  He puts up stats every night.  This defenseman has 13 goals and 19 assists while averaging 13.7 FPPG.  For a cost of $5100, this is a super price.
Up front and leading the charge to light the lamp is what we need from these Super Players.  Forwards come at a cost so we need focus on value but not lose on our goal of getting Super Players.  Here is a look at my Super Players that come with value based on costs, value based on productivity and value that will make him part of my Super Lineup.
Now more powerful than ever: The Machine - DFS Lineup Optimizer
Patric Hornqvist of the Florida Panthers.  Patric comes in with a cost of $5400 which is super for us and by his stats for the year he makes our list.  He has 14 goals and 18 assists while averaging 13.6 FPPG.
Jason Robertson of the Dallas Stars.  Jason is playing on the top line which is, yes, Super.  Posting 14 goals and 22 assists while averaging 12.8 FPPG.  Super price value of $4900
William Nylander of the Toronto Maple Leafs:  This player has bounced back from a poor year last year to collect 14 goals and 20 assists.  Super price at $5500
Alex Tuch of the Vegas Golden Knights:  One word on the cost ($4400) for this player is SUPER.  Posting 17 goals and 12 assists while averaging 11.7 FPPG.
Vincent Trocheck of the Carolina Hurricanes:  Vincent having a Super year averaging 16 FPPG while putting up 17 goals and 21 assists.  Vincent was on a Super 13 game point streak that came to an end during his last game which tells me he will be looking to start another Super streak starting tonight.  He comes at the Super cost of $6400
Auston Matthews of the Toronto Maple Leafs:  There is not a better Super player then Austin on tonight's card.  Auston has a cost of $8800 but this price is worth it.  Posting 34 goals and 24 assists while averaging 22.3 FPPG.  This makes him a Super way to complete my lineup.
Have a Super Saturday.