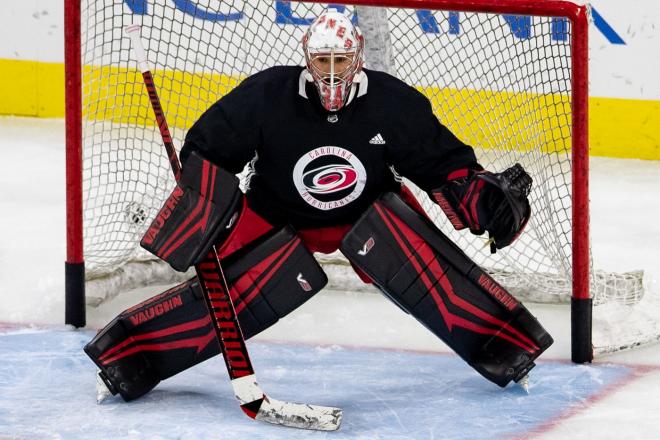 Good afternoon Hockey fans, as we are looking forward to the trade deadline day on Monday we still need to focus on your daily Saturday plays.  Here is a look at some players to get into your lineup tonight.

Let's get right to our goalies for tonight.

Petr Mrazek of the Carolina Hurricanes, posting a .962 save percentage since his return and a FPPG of 25.3 is in a very favorable spot tonight facing the Detroit Red Wings.  Look for Petr to continue his hot streak tonight.  FanDuel has him at a cost of $8600 which is a high price but worth the value.

Mike Smith of the Edmonton Oilers, posting a .922 save percentage and FFPG of 21.1 is playing against his former team ( Calgary Flames ). He should have enough motivation to step up his game against a low scoring Flames team.  His cost on FanDuel is a modest $7400 so worth a look based on value alone.

Here are a few defenseman to look at tonight.

Seth Jones of the Columbus Blue Jackets, posting 4 goals and 17 assists so far this year costs on FanDuel of $4900 while averaging 11.3 FFPG.  He is a solid play tonight.

Drew Doughty of the Los Angeles Kings is having a great year, that was somewhat unexpected, is worth the cost of $6200 tonight.  He is averaging 12.7 FFPG

Josh Morrissey of the Winnipeg Jets is having a solid year but is starting to pick up his game as he is averaging 9.6 FFPG. At a cost of $4200, Josh is someone who can fill in your lineup and use your money on higher ranked forwards while not losing out much on the production side for the defensive position.

Now your key to success is finding those forwards to complete or start your roster build.

Your high end forwards like Connor McDavid and Austin Matthews set the table but come at a high cost of $9000 and $8800 respectively. Both are solid plays but do eat up some salary when choosing them.

Evander Kane of the San Jose Sharks has a great value, costing only $7300.  It's hard to believe the year he is having with 16 goals and 19 assists while averaging 14.9 FFPG considering all of the distractions with him.  He is another solid play tonight.
Ondrej Palat of the Tampa Bay Lightning is having a great year.  Playing on the top line has seen him produce solid numbers thus far.  He has 12 goals and 22 assists while averaging 12.9 FFPG and is a great value costing only $5400 on FanDuel.
Zach Hyman of the Toronto Maple Leafs is a player that every team needs.  He has high energy and plays a complete game, kills penalties and plays on the top line.  Averaging 12.3 FFPG, he is not going to get you 2 or 3 goals, but at a cost of $5000 he is going to contribute to your lineup.
Nino Niederreiter of the Carolina Hurricanes is as steady as they come.  Averaging 10.6 FFPG he is worth a look as a filler to your lineup at a cost of $4400
Those are a look at some players worth building or filling your lineup tonight.  Enjoy the games.