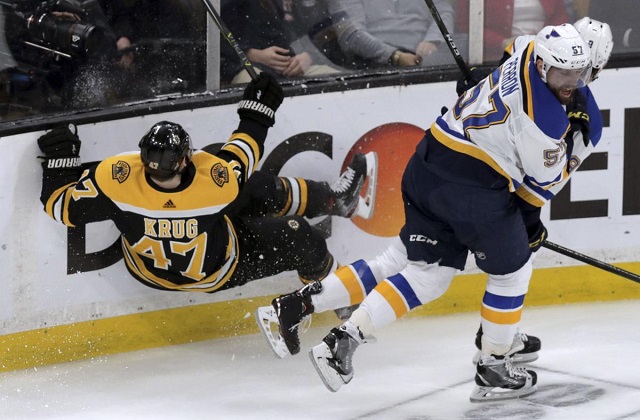 Stanley Cup Final: It's Not Over Yet

Don't write off the Boston Bruins just yet.

Granted, the Bruins are a battered and bruised bunch courtesy of the bludgeoning the big, bad St. Louis Blues have administered them over the first five games of the 2019 Stanley Cup Final.

For all intents and purposes, the B's look to be running on fumes.

True, the Blues did shut down Boston's offense in the second period of game five, and have been wearing down the Bruins with their relentless, physical style of play.

That said, their tainted 2-1 victory Thursday night could well have provided a rallying point for the Bruins.

Everyone knows that David Perron's game-winning goal shouldn't have counted - fans, broadcasters, the Bruins, even the Blues themselves. Tyler Bozak's slewfoot on Boston winger Noel Acciari - whether intentional or not - was a penalty.

As Boston's head coach Bruce Cassidy said after the game, that second goal made it "hard for us to come back".

The missed call provided the margin of victory for St. Louis, who now find themselves one win away from something that was unthinkable when they were at the bottom of the NHL standing in early January: the first Stanley Cup in team history.

Standing in their way will be a galvanized Bruins squad.

Much like the San Jose Sharks in their first-round series against Las Vegas - where their captain, Joe Pavelski was concussed by a perceived blindside hit by Cody Eakin - the Bruins figure to rally around Acciari.

Like the Sharks, the Bruins' resolve to prevail has been hardened by the missed call. Doubtless, they are going to leave it all on the ice at Enterprise Centre Sunday night.

They have been done an injustice - Oscar Sundqvist's mugging of Bruins defenseman Torey Krug earlier in the game, which resulted in a golden scoring chances for the Blues, was another blatant penalty that the refs overlooked - and they are focused on righting that wrong.

It would have been better for the Blues to have won game five fair and square.

Now, they will not only have to face a team that's determined to take the series back to Boston for a seventh and deciding game, but they will also have to contend with the so-called "hockey gods".

Remember what happened after Sharks' defenseman Erik Karlsson scored his overtime winner off a blatant hand pass in game three of the western conference final? The Blues came back to win the next three games to advance to the Stanley Cup Final against the Bruins.

It remains to be seen if the battered Bruins have enough gas left in their tank to take the series to a seventh game. However, two things are for sure.

First, they possess the motivation that's needed to pull out a win in hostile territory; they don't want a missed call to define their ultimate fate. And second - if you believe this - they will have the hockey gods on their side.

The Blues are now on the other side of a missed call.

Will they be the ultimate rags to riches story, or will the hockey gods (a.k.a. the law of averages) provide the favor the Bruins need to author a stirring comeback of their own?

Tune in Sunday night to find out.