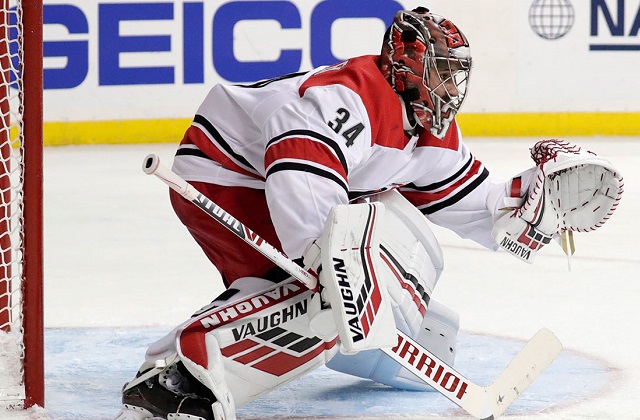 No-Name Goalies Stealing the Show in the NHL Playoffs

Without question, the biggest storyline in the NHL playoffs to date is the fact that the four division winners - Tampa Bay, Calgary, Nashville and Washington - were shockingly dismissed by wild card teams in the first round.

However, as newsworthy as those defeats were, the flame-outs of the division winners were (sorry Calgary, no pun intended), the first round yielded another intriguing storyline.

To wit, four of the eight goaltenders that backstopped the first-round upsets literally came out of nowhere.

Prior to the onset of the playoffs, names such as Ben Bishop (Dallas Stars), Tuuka Rask (Boston) Martin Jones (Sharks) and Sergei Bobrovski (Columbus) were familiar.

All four are established netminders, with Bishop being a 2019 Vezina Trophy nominee, Rask long being one of the NHL's top 'tenders, Jones having starred previously in the post-season and Bobrovsky taking home the Vezina in 2012-13 as the NHL's top goaltender.

With those credentials, it's not surprising they led their respective teams into the second round.

The fact that Jordan Binnington (St. Louis), Robin Lehner (Islanders), Philip Grubauer (Colorado) and Peter Mrazek (Carolina) backstopped their respective teams into round two, however, was surprising, if not stunning.

That's because all four goaltenders literally came from oblivion to be playoff heroes.

Binnington, 25, was buried in the minors and was brought up by the Blues 26 games into the regular season in a last ditch effort to find a dependable goaltender.

Lehner was pulled off the scrap heap by New York in the off-season after being let go by Buffalo in the wake of substance abuse problems.

Grubauer, who formerly played for Washington, was signed as a free agent in the off-season to ostensibly back up the Avs' incumbent starter in net, Semyon Varlamov.

And Mrazek - a cast off from, of all places, Philadephia - was signed by Carolina in a desperate attempt to solidify their goaltending situation after starter Scott Darling couldn't stop a beach ball. Curtis McElhinney was later brought in off wavers from Toronto to add experience in a back-up role.

To the surprise of many seasoned NHL observers, Binnington - who helped St. Louis nearly win the western division after the Blues were in last place overall in early January - was unflappable in dismissing the Winnipeg Jets in six games.

Lehner, meanwhile, was a brick wall in the Isles's four-game sweep of the Pittsburgh Penguins. Then there was Grubauer, who was quietly spectacular in Colorado's five-game rout of the Flames.

As if to do his part, all Mrazek did was make the Big Save repeatedly against Ovi and the Caps, especially in game 7. Imagine - the Stanley Cup champions eliminated by a goalie the Flyers didn't want.

Now, with Mrazek day-to-day with a lower body injury, McElhinney - who Toronto jettisoned in favour of Garret Sparks, who subsequently struggled as back-up to Frederik Andersen - has been entrusted with (at least) the temporary task of keeping the puck out of the Carolina net against Lehner and the Islanders, whom the 'Canes are currently beating.

Ironic, isn't it? Given the opportunity to shine in net, these men took it.

One or two of them - how about Binnington facing off against Lehner or Mrazek in the Stanley Cup final? - might end up being the MVP of the Stanley Cup playoffs, going from a regular season "Who's That?" to the list of "Who's Who" in NHL playoff lore.