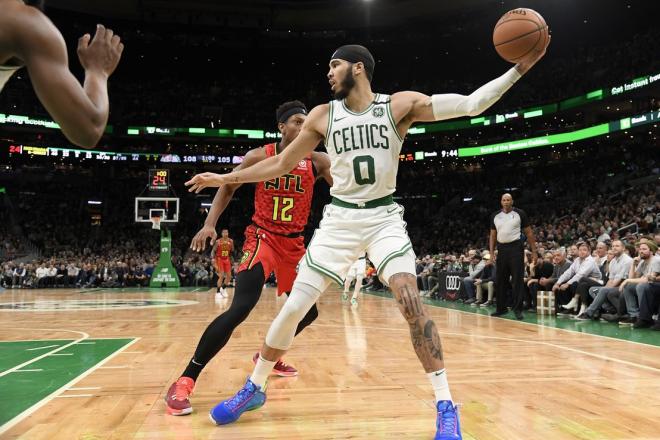 While not many people envisioned this matchup to decide the Eastern Conference, here we are.  The Celtics will be seeking their 22nd NBA Finals appearance, while the Heat will be looking for their sixth, and first since 2016 when they fell to the Spurs in five.  Boston has not advanced to the Finals since 2010 when they lost a seven-game-series to the hated Lakers.  This will be the third postseason meeting between the two sides, with Miami winning the last two, including the 2011 Conference Finals when the Heat went on to win the whole thing and, in the process, netting LeBron James his first ring.

Jason Tatum – What a feather in the cap it would be If the Duke alum were to be able to lead the most successful team in NBA history back to the Finals in just his third year.  Tatum had a decent start in the first five games against the Raptors in the Eastern Conference Semifinals, but only topped the 50.0 mark on DraftKings once in those games, scoring 55.0 in Game 2.  He exploded in Game 6 however, with 68.5 DK fantasy points, and finished the series off with 60.5 FP in the Game 7 win.  He did get four fouls in Game 5 but still managed to play 36 minutes and score 41.5 FP.

Jimmy Butler – The five-time all-star has really come alive during the postseason.  Butler topped the 40.0 DK Fps mark in three of the five games against Milwaukee, with high of 53.5 in Game 1.  He did struggle in Game 4 with just 28.8 FP.  Not surprisingly, that was also the only Heat loss in the series.  If that stat stays to form it should bode well for Miami against the Celtics as Butler is more of a hit than miss player.  Surprisingly, he did not play more than 39 minutes in any of the games last round, but the team was so dominant, maybe the 9th year guard out of Marquette can find a little extra in the Fuel Tank for a chance to make it to his first ever NBA Finals.

Best of the Rest

Bam Adebayo –. The third-year center is a bit of an enigma, but he is usually worth paying up for.  He scored at least 46.8 DK FP in three of the five games last round, but also only checked in with 31.8 in Game 2 and finished the series with 21.0 in 31 minutes of play in the final game.  With his salary, you really can not afford to have him on your roster with those types of performances, but if he can stay consistent and his salary is not inflated, he is worth having.

Jaylen Brown – Brown has really benefited from the Hayward injury played over 40 minutes in three of the five games against Toronto.  He also scored over 20 PPG, which was second only behind Tatum. Fantasy wise, he had a monster Game 6 with 60.0 DK FP, but that did come in 51 minutes of action in the extended game.  There were two games in which he failed to reach 30.0 FP, but one of them was Game 1 when he tallied 29.8 and the other was Game 4 when he was in foul trouble and only managed 24.0.  His salary is usually reasonable, so he is somebody to target, but keep an eye on the Hayward return and if it begins to affect Brown's minutes.

Goran Dragic – The veteran guard is coming off a solid series that saw him score 24.7 PPG on 17.0 FGA.  The Dragon is playing his fair share of minutes in the playoffs, going from 32-40 on any given night.  He is good for the occasional high assist game as well, as he had four in Game 4 against the Bucks, but he is not really a double-double threat.  He showed out in Games 1 and 2 vs. Milwaukee with 44.0 and and 40.3 DK FP, but ended Game five with a playoff low 24.5 in 33 minutes of action.  Depending on which version of him you get, he can be a difference maker in your lineup.

Kemba Walker – After spending his first nine seasons in Charlotte, Walker seems to be enjoying the winning ways of the Celtics.  The ninth-year guard is playing a lot of minutes, with three games over 40 against Toronto.  He is pretty consistent with anywhere from 30.0 DK PP to 38.0 in four of his seven games against the Raptors.  He had two where he scored above 40.0 FP and the anomaly in Game 6 when he finished with four fouls and 19.5 FP.

Marcus Smart – Smart scored the fourth highest average in FP for the Celtics against Toronto, with 32.8, just a tenth of a point less than Walker.  The former Oklahoma State Cowboy messed around and got a triple-double with 23 points, 11 rebounds, and 10 assists in the Game 6 double-overtime loss against the Raptors.  He did play 50 minutes that game, but those numbers are nothing to shake a stick at.  In the series, he had three games in the 20s FP wise, three in the 30s, and then 60.3 in the aforementioned Game 6.  His price always seems to be low on FanDuel, but if you can catch him at a bargain on DraftKings, he is worth taking a serious look at.

Tyler Herro - Herro battled through niggling injuries during five-game-series against the Bucks, but his lowest minute total was 29 and he topped out at 37.  Ironically, he also topped out at 37.0 DK FP in that same game.  It does not take a mathematician to realize that is a point-per-minute.  While you cannot expect that kind of performance from him every game, it still makes Herro a serviceable option in this series.

Gordon Hayward – While he been officially ruled out for Game 1, he is expected to return for this series.  He did not practice Monday but was put through a “hard work out.”  You cannot be sure what you are going to get from him when he does come back but he would make for a sneaky play when he first returns and could have a Rajon Rondo type impact.

Jaylen Brown- He is listed as day-to-day while nursing a groin injury so make sure to double-check his status for Game 1, but he should be all systems go and you can expect him to have a strong fantasy impact.

Gabe Vincent - The Heat PG is listed as day-to-day with a strained shoulder issue, but even if he is in the lineup, he only works a salary saving desperation play in a GPP.