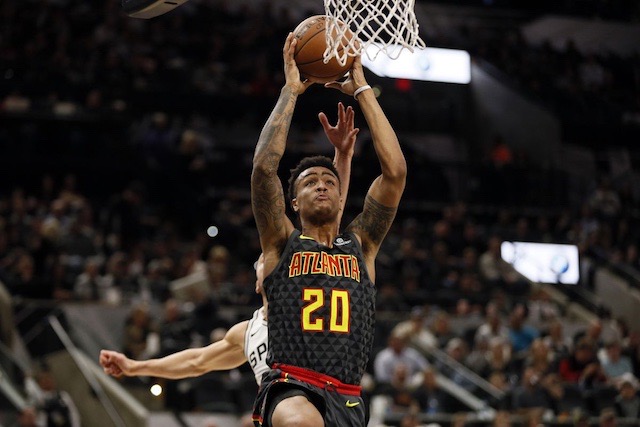 John Collins on Fire in Atlanta

John Collins (96% owned in Yahoo leagues) of the Atlanta Hawks is really tearing up the league right now - he’s averaging more than 22 points a game in his last 10 contests and his 3-point shooting is only getting better. Despite missing several weeks because of injuries, he still averages nearly 20 points and 10-plus rebounds per game.

His field goal percentage is a fantastic 59%, and he rarely dips below 50%.  Collins is already one of the best big men in the league, but because he doesn’t get a lot of blocks, he’s still under rated in fantasy. The bottom line is, the time to make a trade for him is right now because he's looking at a monster second half of the season.

And as I mentioned, he’s now added a three point shot to his repertoire. During his last 4 games, he’s hit 10 out of 15 three pointers, in other words he’s shooting 67% on the three ball!  Oh, and did I mention that he shoots over 70% from the free throw line? It is VERY RARE to find a player who posts 20 points plus 10 rebounds a game player and who won’t cost you a thing in any of the percentage categories.

Collins is just beginning to get mentioned in the Most Improved Player category. If he continues to play at such a high level, he has a great chance to win it. With the Atlanta Hawks dealing with a lot of injuries, they’ve come to rely on Collins, and look to him when they need baskets at the close of games.

You’ll need to make a very good offer to get him, as this is one player I wouldn’t recommend sending out a low ball bid on.  He plays for a team that doesn’t get much attention, and isn’t even trying to make the playoffs at the moment.  But the one thing Atlanta is doing – is trying to develop their young players – and Collins will only benefit from that. Shoot out a few offers sooner than later.