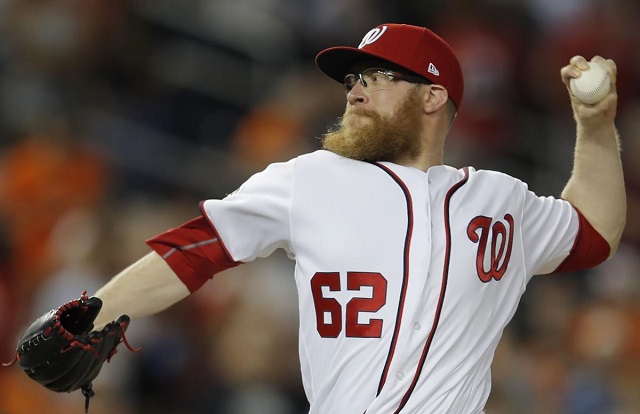 Arodys Vizcaino was placed back on the disabled list Saturday due to the shoulder inflammation that put him out of action for a couple of weeks last month. The Braves have lost seven of nine and haven't had a save chance since July 2. That was nailed down by A.J. Minter, who was tagged for three earned runs in his most recent outing. But disregarding that rough spot, Minter otherwise has posted a 1.17 ERA with a 20:2 strikeout-to-walk ratio since the start of June. He should resume being the Braves' closer and is available in about 70 percent of CBS leagues and 80 percent of Yahoo leagues.

The Tigers activated Shane Greene off the DL on Friday. He gave up two hits and struck out a batter in a one-inning appearance versus Houston. He will put him back into the ninth inning in order to showcase him for trade suitors. Greene has logged 19 saves with a 3.92 ERA and a 1.26 WHIP this year. All-Star Joe Jimenez, who went 1-for-2 in save opportunities while Greene was injured, will move back into setup duty. He's next in line if/when Greene gets dealt.

There is some rare clarity with the Angels in the ninth as Blake Parker has taken the reins. He's put up eight consecutive scoreless appearances, but those quality outings have come with just one strikeout in his past five appearances. He's lowered his ERA to 2.91, but his strand rate is a very high 86.2 percent. You can invest if you want -- Parker is available in about 40-50 percent of leagues -- but I don't think this is going to be a consistently smooth ride, and a couple of poor innings may ruin what Parker has built thus far. Fantasy owners should know they can't trust Mike Scioscia with closers.

There is still a closer committee in Philly, but at least we have a firm idea of the combatants: Seranthony Dominguez and Victor Arano. The former notched a save Thursday, his first since July 3. The latter gained three saves from July 4-9. Dominguez should be the guy you want if he's still available in your league; he's registered more strikeouts and fewer walks. Stability for the rest of the season is probably too much to ask for, however.

It sounds like Ryan Tepera will be ready to come off the disabled list following the All-Star break, so Tyler Clippard's run in the ninth may have just one day left. Meanwhile, the suspended Roberto Osuna is scheduled to begin a rehab assignment this weekend in preparation for his return to the diamond, which could come as soon as Aug. 5. Keep a close eye on what happens with Osuna. He's currently available in about half of all fantasy leagues and could very well be a top-tier closer down the stretch -- IF Toronto allows him back on the field next month. He has an Aug. 1 court date for his domestic assault charge. He reportedly plans to plead not guilty.

Sean Doolittle has been sidelined by a pinched nerve in a toe, but he, like Tepera, should be back on the mound following the break. That's good news for the Nats as Kelvin Herrera, who was expected to fill in for Doolittle after he was placed on the disabled list July 6, has allowed a 1.090 OPS this month. And it was Ryan Madson who picked up a save Thursday. Let's just hope the bearded lefty is ready to go next week.