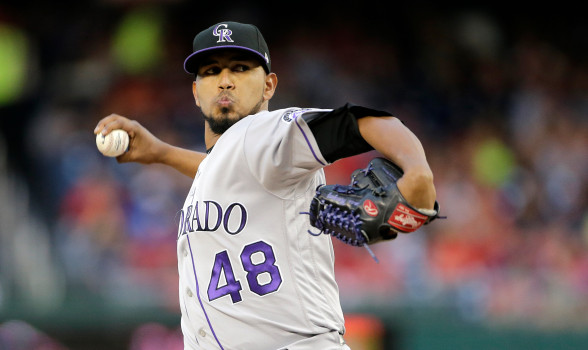 Top Three Pitchers to Pick Up From Waivers

If you are reading this on Thursday, go pick up Lamet now. This article can wait. He is slated to pitch tonight versus the Reds in Cincinnati. You may not know how to pronounce his name, but all you really need to know is that Din-EL-sun La-MET has won three consecutive starts and has allowed a total of three hits over his last 11.2 innings. Granted, he wasn't exactly facing a Murderer's Row offense by any stretch during his recent winning streak (the Giants followed by the Pirates twice), but the Reds aren't world-beaters either. It's a manageable assignment for the youngster. Better yet, he will avoid the Dodgers this weekend and get to face the Phillies at home to begin a possible two-start week afterward. Now, his next three starts following that will probably come against the Nationals, at the Marlins and then those Dodgers, so this isn't exactly a long-term add. But if you need some help this week and to begin next week, Lamet is worth a look.

As expected, last week's trade deadline opened a lot of doors for setup men to move into a closing role. Belisle was one such pitcher after the Twins dealt Brandon Kintzler to the Nationals last Monday. Belisle doesn't have what you would call "closer stuff," which is just a lazy way of saying he doesn't strike out many batters (7.46 Ks per nine). But the fact that matters is he's getting the job done so far. He locked down saves on back-to-back days earlier this week versus the Rangers and Brewers, respectively (Update: Belisle struck out the side in a perfect non-save inning Wednesday night against Milwaukee). I say it every week, but any closer is worth owning in fantasy leagues, and it looks like Belisle is the man in Minny right now. I've given him the nod here, slightly ahead of the Braves' Arodys Vizcaino, because even though the latter has better peripherals and throws much harder, the playoff-hunting Twins will likely offer Belisle more ninth-inning chances. Meanwhile, the Braves are the Braves.

Marquez's ownership is still south of 50 percent on some platforms, which means a lot of people have overlooked what he has done over the past month-plus. Either that or owners have just been too scared to invest in a Coors Field hurler. Understandable, but you should know that Marquez has a 2.72 ERA at home since May 10 (seven starts). There's a bunch more numbers that support him, too. He has a sub-1.00 homers per nine rate and a strikeout-minus-walk rate that sits just inside the top 30 among starters. Marquez hasn't lost a decision since June 26 and has logged a quality start in each of his last six outings. He has basically been the Rockies' ace as a rookie. Two of his next three starts will come against the Braves, sandwiched around a meeting at home versus the Brewers, but it doesn't really matter whom Marquez is facing right now. He is putting up stellar stats for fantasy owners and it's about time that the community at large recognized it.