Typically when I enter multiple lineups into a contest I try various strategies using the ASL pro option settings and run the ASL multi-lineup generator.

First, I ran the optimizer with Team Stacking set to Auto and No of Players set to 2. This image shows the DFS Optimizer running with these settings for the Dec 25 FRI-MON slate: 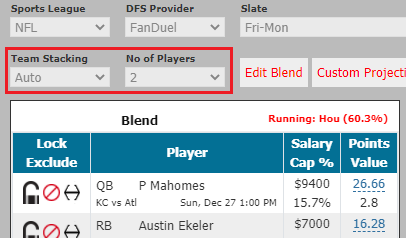 When Auto Team Stacking is enabled, it runs once for each team in the slate.

For my Dec 17 THU-MON slate, it produced a lineup that included the pairing of Josh Allen (QB) and Cole Beasley (WR) of the Buffalo Bills.

I then excluded Josh Allen from the Available Players table, and ran Auto Team Stacking again so that it will give me the second best team stacking combination. This time it gave me Lamar Jackson (QB) with Mark Andrews (TE) of the Baltimore Ravens.

When I am exploring, I always run with Excl Opp Defense off. This is because this feature causes the optimizer to run a bit slower. The ASL optimizer doesn't just calculate defense as a last lineup fill-in from among the remaining defenses that don't conflict with any offensive players, but it is a two-way exclusion. It might pick a defense because of value, and then exclude opposing offensive players. It finds the lineup that produces the most fantasy points for the given set of constraints.

The are the two lineups that the optimizer produced: 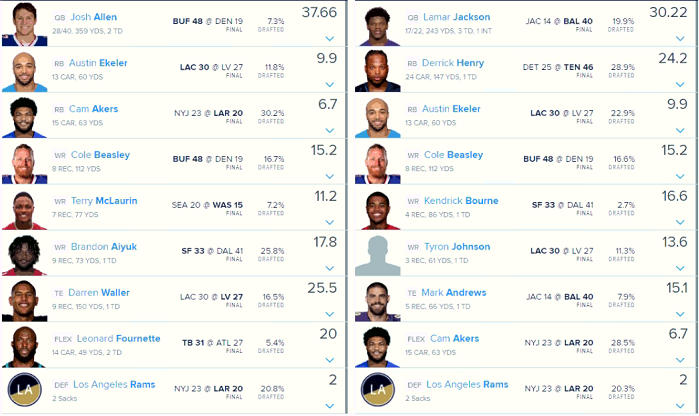 The goal of team stacking is to gain a small edge to increase the odds a lineup will push up into the higher rankings and win a greater return. The idea is that a quarterback and his receivers rise and fall together or that they have positive correlation. A quarterback's performance and the performance of receivers of other teams have no direct correlation. If our goal is just to have an above average score, then team stacking doesn't really help. However, in tournament contests, a lineup must do better than average to win.

So here is the result of the two lineups: 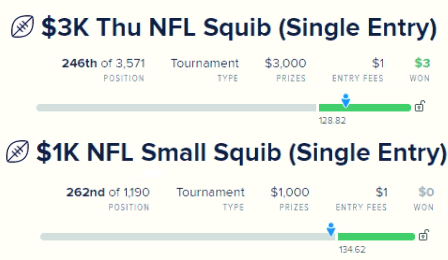 Was this the best strategy for entering these two lineups? What would have happened if I had set the stacking depth to 3 instead of 2? I don't know the answers to these questions, but hopefully this provides you one more approach to think about for setting lineups that work together to give a good chance to win.