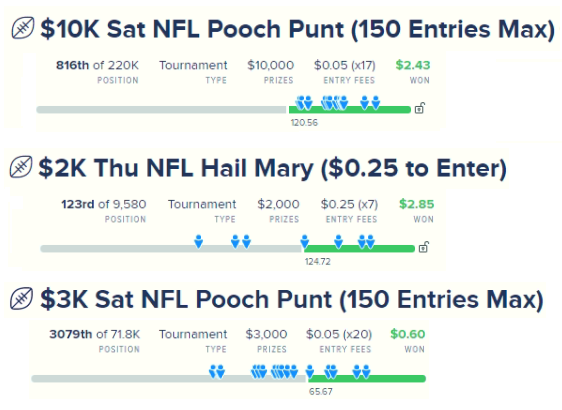 The table below summarizes information about each contest:

In a multi-lineup tournament contest, the more lineups one enters, the greater the odds of winning 1st place price. However, after the first lineup, each additional lineup becomes less likely to win. Eventually, adding more lineups is harmful, not helpful. For example, if there were a multi-lineup contests with 150 total entries, and I entered 150 lineups, I would be 100% likely to win 1st place. However, the cost of the 150 entries would be greater than the total winnings and I would lose about 20% of the entrance fees.

When I play, my goal isn't to hit 1st place, but to have an overall positive trend. Every time I enter a lineup, I have a chance to win 1st place, but winning 1st place would just be a serendipitous event. My way of thinking is that breaking even is winning because I can keep entering contests that have a chance to win 1st place, and sooner or later it will happen, but if I try to force it, I will be more likely to lose money.

So a question I have asked myself is what is the right number of lineups to enter in a multi-lineup contest. It seems logical to me that the more teams involved in a contest, the greater the pool of meaningful players, and therefore there is a greater number of meaningful and diverse lineups to enter in a contest. My entries in the three contests above are exactly opposite this line of thinking, with the most entries (20) in the contest with only two teams, and the least entries (7) in the contest with six teams.

Auto Max Exposure and Auto Min Exposure are ASL algorithms based on player ranking and fantasy points the bound the maximum and minimum number of times a player can be inserted into a lineup with a goal of a player's usage being proportion to their probably to being the top player of their position.

Stack Bonus adds a fantasy point bonus to wide receivers (WR) and tight ends (TE) that are on the same team as the quarterback. Winning a tournament contest requires a lineup perform above average, and the higher a lineup ranks, the greater the payout. This requires some players in your lineup to outperform their projections. Quarterbacks and the players they throw to naturally rise and fall together, so there is a positive correlation between a quarterback's result and the result of the receivers on the same team.

This is the reason for team stacking. It creates lineups with a higher probability to get a big score. The ASL stack bonus is a way to create a flexible balance between team stacking and optimizing for raw fantasy points.

Diversity Bonus adds a fantasy point bonus to players that are not in any other of the generated lineups. Thus, if two players are close in projected fantasy point value, and one hasn't been used in any of the other generated lineups, it will be used in the lineup that is being generated. Diversity helps to increase the odds of not missing out on players that might significantly exceed their projected performance.

So in the case of the two lineups using the default pro-settings, there was significant spread between the top performing lineup and the lowest performing lineup. The goal of diversity is to cause the lineups to spread out, with the hopes that one ranks very high and gets a big pay out. In the case of entering only 7 lineups in the $2K NFL Hail Mary contest, four lineups won, yielding an overall return of 63% above the entrance fees. However, in the $3K NFL Pooch Punt, most of the lineups lost. This fits the hypothesis that with a small player pool, entering a lot of lineups with a large player diversity will trend toward losses, and in this case a loss of 40% of the entrance fees.

So while I was running my lineups for the $10K Sat Pooch Punt contest, I decided I wanted to see if I didn't force any diversity through either Max and Min Exposure or a Diversity Bonus, at what point would the number of players used equal the number of lineups. The more lineups the optimizer produces without any constraints to force diversity, the more the same players will be used over and over in different combination, and the less diversity across the lineups.

Running the multi-lineup generator for this week's Fri-Mon contest, which includes all 32 NFL teams, I charted the number of players used versus the number of lineups generated:

In the case of the $10K Sat NFL Pooch Punt, which only included 4 teams, the crossover point was 17 lineups. So I decided I would enter 17 lineups because without forcing diversity, I was averaging one unique player per lineup. Beyond this the multi-lineup generator starting making lineups with all the same players in other lineups, but just in different combination.

You can see from the scatter grams above that the results were not spread out as much in this contest as much as in the other two, which is to be expected since diversity wasn't forced. When I reviewed the lineups, at first I was concerned. Every lineup had Josh Allen, and I thought, if Josh has a bad night, I will lose all my lineups. However, then I thought, I am entering 17 lineups for $0.85. If I entered 1 lineup at $1.00, the same would hold true, that if Josh had a bad night I would lose completely. So thinking about it this way, I considered that this was no more risky than entering a single lineup at a higher entry fee, and was probably the most likely 17 lineups to have a chance of hitting the 1st place prize.

Fortunately for me, Josh Allen had a big night and every lineup landed in the winning region, resulting in a nice payout.

So the take away from this study is that forcing too many lineups with too much diversity in a contest with too few teams might lead to consistent poor results. There might be a sweet spot around where the number of players used through natural diversity equal the number of lineups generated. If this is true, then it makes sense to enter less lineups in contests with less teams, and more lineups in contests with more teams. However, the sample size of this study isn't sufficient to make this more than a hypothesis. Nor am I concluding that some diversity shouldn't be bit forced through max and min exposure and diversity options. I present it merely as a concept to consider when entering multiple-lineup contests.